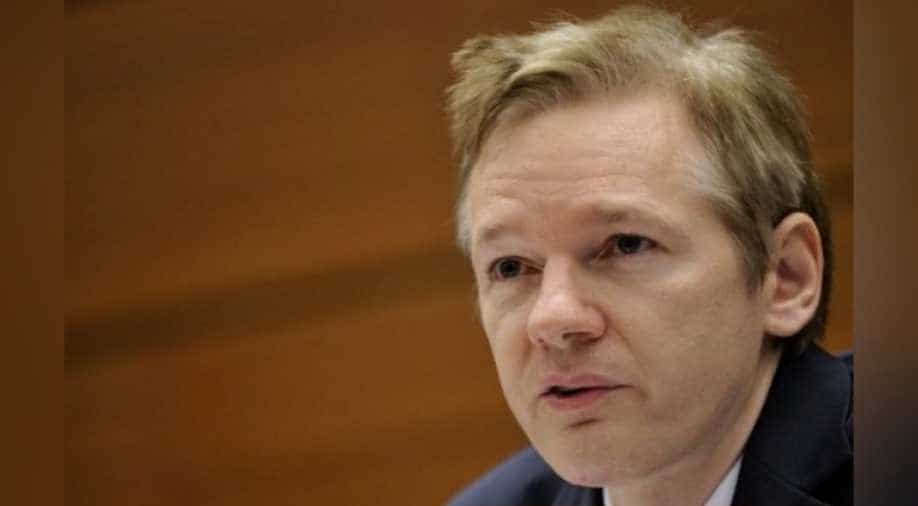 Within hours of police hauling him out of the embassy, the 47-year-old Australia appeared in court for breaching his British bail conditions back in 2012 and to face a subsequent US extradition request.

WikiLeaks founder Julian Assange woke up in a British jail Friday at the start of a likely lengthy extradition battle after a dramatic end to his seven-year stay in Ecuador's London embassy.

Within hours of police hauling him out of the embassy, the 47-year-old Australia appeared in court for breaching his British bail conditions back in 2012 and to face a subsequent US extradition request.

After Assange was arrested and dragged into a police van in the British capital, American officials unsealed an indictment against him for computer hacking as part of his WikiLeaks whistleblowing activities.

The Sun tabloid reported he was being held in Wandsworth prison in south London, where he spent nine days in 2010 following an investigation over alleged sexual assault in Sweden that has since been dropped.

Deemed "the most overcrowded prison" in England at its last inspection in 2018, the 19th-century facility holds around 1,600 inmates.

Inspectors found "most prisoners share a cell designed for one person" while more than a third "were receiving psychosocial help for substance misuse problems".

Assange was remanded into prison custody Thursday at a short hearing in front of a London judge, who pronounced him guilty of disobeying his bail terms by fleeing to the embassy in June 2012.

He could receive up to a year in prison when sentenced at an as yet undetermined later date.

His separate extradition case is set to be next heard by video-link at Westminster Magistrates Court on May 2.

Assange's London lawyer Jennifer Robinson confirmed he would be "contesting and fighting" his long-feared extradition to the United States.

"He said: 'I told you so'," Robinson told reporters and supporters, including fashion designer Vivienne Westwood, outside court on Thursday.

WikiLeaks editor Kristinn Hrafnsson warned he fears the US will add more charges, meaning he could face decades in an American prison.

Extradition 'should be opposed'

Assange sought asylum at Ecuador's premises in London's chic Knightsbridge district after a British judge ruled he should be extradited to Sweden to face the sexual assault allegations.

Inside the red-brick building he lived a sparse existence in a flat measuring 18 square metres (190 square feet) and comprising just a bed, shower, computer, treadmill and microwave.

However, relations with his Ecuadoran hosts gradually soured and pro-US President Lenin Moreno on Thursday pulled his asylum, cancelled his citizenship and permitted British police to remove Assange.

Prime Minister Theresa May welcomed the arrest as showing "no one is above the law".

But opposition Labour leader Jeremy Corbyn, a leftist stalwart, called for the government to block the extradition.

"The extradition of Julian Assange to the US for exposing evidence of atrocities in Iraq and Afghanistan should be opposed," he said on Twitter.

Meanwhile, May's words prompted a furious reaction on Twitter from Assange's mother, who lives in Australia.

She accused the British prime minister of "trying to divert attention away from her Brexit dog's breakfast by cheering on the thuggish, brutal, unlawful arrest of my courageous, tortured multi-award winning journalist son".

Legal experts said on Friday that the case could take several years mired in British courts and, if appealed, potentially go all the way to the European Court of Justice.

"This extradition will be very difficult to fight -- given the nature of the UK-US extradition agreement," Anthony Hanratty from the law firm BDB Pitmans told The Times.

He added other factors stacked against Assange included "the weight which the UK courts attach to the trust and co-operation between the two countries and the effort the US will likely put in".

At Thursday's hearing, judge Michael Snow described Assange as a "narcissist" and said he could consent to the extradition and "get on with your life".

Two British judges last year agreed to block the extradition of accused hacker Lauri Love to the US, on the grounds it would be "oppressive", in a ruling hailed a "landmark judgement".

The US first requested Love's extradition in 2013.

Britain eventually said it would not send him to the US because of a high risk he would attempt suicide.

Both Love and McKinnon suffer from Asperger's syndrome, which played a part in the respective rulings.