Japan officials hunt for reasons behind devastating fire that killed 34 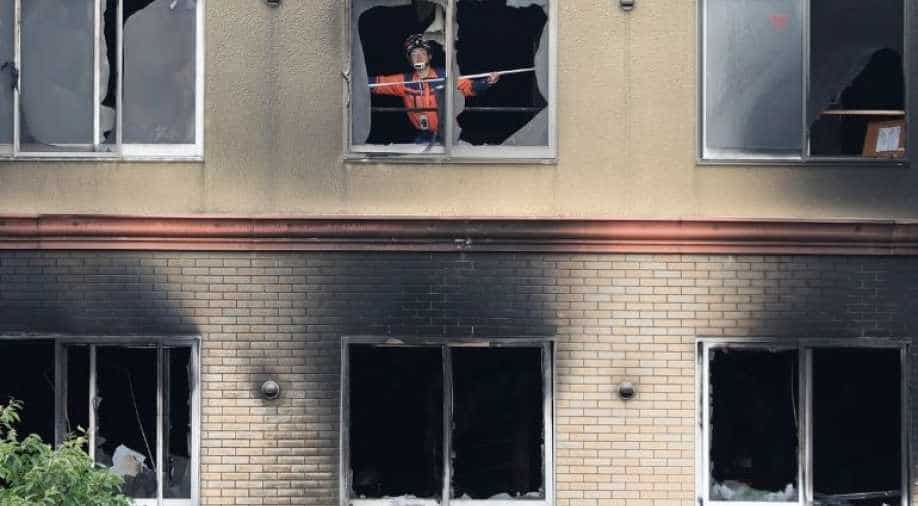 A firefighter inspects the interior of the torched Kyoto Animation building in Kyoto, Japan. Photograph:( Reuters )

Nineteen of the dead were found piled on top of each other on a stairway from the third floor to a door leading to the roof, with some early reports suggesting it could not be opened from the inside.

Japanese officials groped on Monday for an explanation of why a blaze ripped through an animation company, amid reports that smoke spread so fast that a majority of victims who had tried to flee through a rooftop door could not open it in time to escape.

One of Japan's worst mass killings in decades, Thursday's attack at Kyoto Animation killed 34 after a man shouting "Die!" set ablaze a bucket of gasoline he had poured at the building entrance.

Nineteen of the dead were found piled on top of each other on a stairway from the third floor to a door leading to the roof, with some early reports suggesting it could not be opened from the inside.

But police quoted by NHK national television on Monday said investigations had shown that while the door could be opened from the inside, smoke from the blaze appeared to have spread so fast it overcame the victims before they could do so.

Junzo Yamamoto, head of the National Public Safety Commission, offered flowers at the site before stepping into the building's blackened hulk to inspect it.

"The question of how we can prevent this kind of incident is extremely difficult to answer," Yamamoto told reporters. "Before getting there we need to clarify the whole picture."

Of the 26 people whose autopsy results have been released, 20 burned to death, three suffered carbon monoxide poisoning and two suffocated, Kyoto police said. The cause of death of one was undetermined.

Fire officials told a city assembly panel that everything at the building had complied with the fire code and they were investigating why so many lives were lost, NHK said.

The company had run sufficient fire drills and taken all steps required by law, including "hanging walls" designed to stop smoke from rising, it added.

Earlier, experts said a spiral staircase near where the fire had been lit acted as a chimney, carrying the smoke upwards through all three storeys. Survivors have described a "dark mushroom cloud" of smoke rising the staircase.

The tragedy left the company at a loss, it said in a statement late on Sunday.

"All of these people were our talented, precious colleagues," it said. "Both for us here, as well as the animation industry as a whole, this is a huge blow."

Late on Saturday, police issued an arrest warrant for suspect Shinji Aoba, 41, a loner from a city near Tokyo who is in the hospital with serious burns. Police plan to arrest him once he recovers.