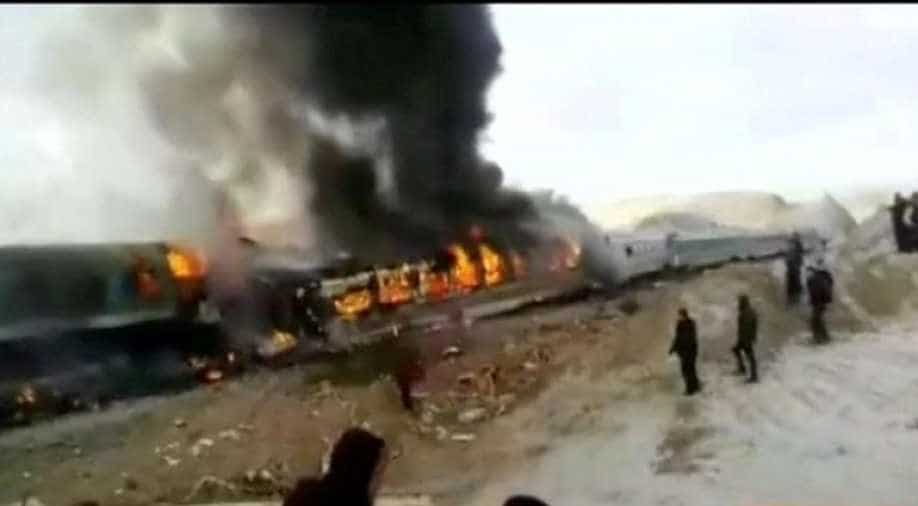 Two trains collided and one caught fire in the northern province of Semnan on Friday, killing 44 people and injuring dozens more, in one of the country's worst ever rail disasters. Photograph:( Reuters )

The head of Iranian Railways resigned Saturday after three of his employees were arrested over a collision between two trains that left at least 44 people dead.

Mohsen Poor-Seyed Aghaie, a deputy minister in the transport ministry and head of the state-owned railway company, appeared on state television late Saturday and announced his resignation "as a social responsibility and out of sympathy for the survivors of this accident".

Two trains collided and one caught fire in the northern province of Semnan on Friday, killing 44 people and injuring dozens more, in one of the country's worst ever rail disasters.

The crash took place on the main line between Tehran and Iran's second city Mashhad.

One of the trains had stopped between the towns of Semnan and Damghan after an apparent mechanical failure, forcing officials to halt others on the line.

But when a new shift started at the control centre in Shahroud, the second train was allowed to resume its journey.

The accident happened due to "human error", Aghaie said, explaining that the official at the control centre had told the train driver to manually disable an automated system that was preventing it from moving toward the broken train.

Three people were detained over the resulting crash.

"During the investigation, three people in charge of the northeast train control centre based in the city of Shahroud... were arrested," provincial prosecutor general Heydar Asiabi told reporters.

Supreme leader Ayatollah Ali Khamenei offered his condolences on Saturday for the "painful incident", which came just a day after more than 60 Iranian pilgrims were killed in a suicide attack in Iraq.