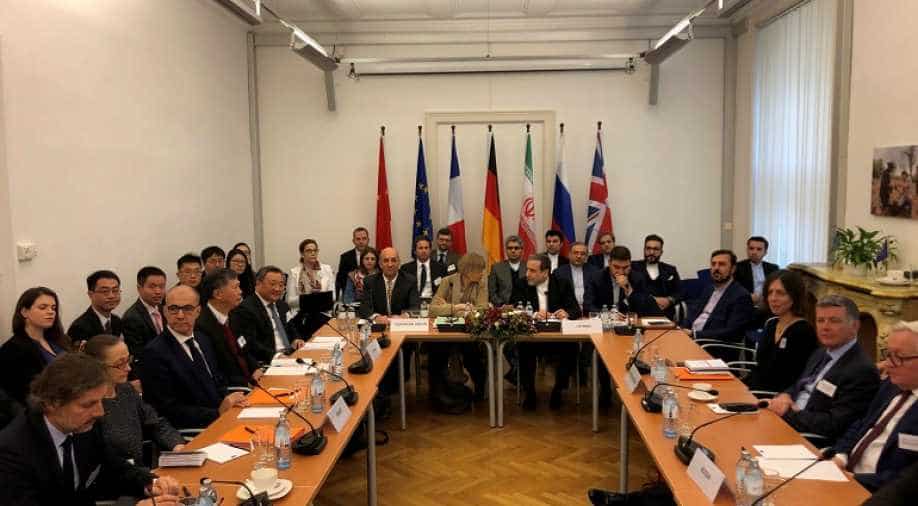 The meeting came amid heightened friction between Iran and the West. Tehran has rolled back its commitments under the 2015 deal in response to Washington's withdrawal last year and reimposition of sanctions that have crippled its economy.

European powers demanded at talks on Friday that Iran stop violating their nuclear deal, but stopped short of triggering a mechanism that could renew U.N. sanctions and kill the 2015 accord, officials said.

The meeting came amid heightened friction between Iran and the West. Tehran has rolled back its commitments under the 2015 deal in response to Washington's withdrawal last year and reimposition of sanctions that have crippled its economy.

With Tehran angry over a lack of European protection from US sanctions, there appears scant scope for compromise.

The Europeans and Iran clashed on Thursday over the Iranian ballistic missile programme before senior diplomats from the remaining parties to the deal - Britain, France, Germany, China and Russia - met Iranian officials in Vienna on Friday to assess the state of the nuclear agreement.

As the U.S.-Iran confrontation has eroded the accord, the Europeans are torn between trying to save it and responding to Iran's breaches, which have increasingly tested their patience.

The breaches have included exceeding the maximum amount of enriched uranium it is allowed under the deal and resuming enrichment at Fordow, a plant buried inside a mountain that Iran hid from U.N. nuclear non-proliferation inspectors until Western spies exposed it in 2009.

The European "E3" powers - France, Britain and Germany - have been considering triggering a mechanism in the deal that could lead to reimposition of global, United Nations sanctions.

"All countries need to refrain from taking actions that further complicates the situation," Fu Cong, director general of the Department of Arms Control of the Chinese Foreign Ministry, told reporters after the talks.

"In our view there is an element of automaticity into this and we can't be sure that countries can keep this process under control. It could aggravate tensions," he said, adding that the European powers had not indicated whether or when they would trigger the mechanism.

A European diplomat said the E3 had stressed the need for Iran's compliance. "The good thing is it's still alive," the diplomat said, highlighting the low expectations.

Iran's top envoy to the talks, Deputy Foreign Minister Abbas Araqchi, said that Iran would continue reducing its commitments to the deal unless it could benefit from it.

"We repeated in this meeting too that until the time solutions are found so that Iran can benefit from (the nuclear deal), Iran's process of reducing commitments will continue," Araqchi said, according to the official IRNA news agency.

Araqchi said that he had a "very useful" meeting with International Atomic Energy Agency (IAEA) Director General Rafael Grossi on Friday and that both sides emphasized they would continue their professional cooperation in comments broadcast on state TV.

Diplomats have said a political decision was unlikely to be made until January, when Iran is expected to further scale back its adherence to the pact, under which it curtailed its nuclear activities in return for relief from sanctions.

"The European parties to the deal should know that the clock is ticking for them. They try to keep Iran in the deal but then take no action against America's bullying and pressure," said a senior Iranian official.

Underlining the tension, the Iranian delegation had earlier threatened to boycott the talks after discovering that an exiled Iranian opposition group planned an anti-government protest outside the hotel where the meeting was due to take place.

Tehran has criticised the three European powers for failing to shield Iran from the far-reaching U.S. sanctions, which have driven away foreign companies interested in business there.

"I don't think the Europeans have reached their red line yet, but the repeated violations and the fact we're now entering (nuclear) proliferation territory means their credibility is on the line," said a Western diplomat.