I want to know what happened to Khashoggi's body, says finacee Hatice Cengiz 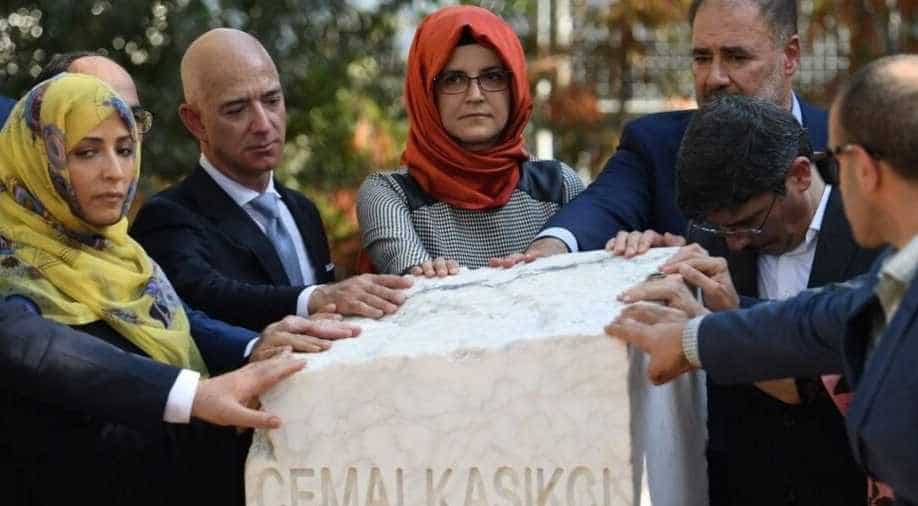 Hatice Cengiz (C) and participants stand near a memorial stone during an event marking the one-year anniversary of the assassination of Saudi dissident journalist Jamal Khashoggi in Istanbul. Photograph:( AFP )

Amazon founder and Washington Post owner Jeff Bezos joined activists in Istanbul Wednesday for a memorial service outside the Saudi consulate where journalist Jamal Khashoggi was murdered a year ago.

Saudi journalist Khashoggi, a columnist for the Post, was strangled and dismembered at Saudi Arabia's consulate on October 2, 2018, when he went to obtain documents required for his marriage to Turkish citizen Hatice Cengiz.

She unveiled a memorial to Khashoggi directly in front of the consulate.

"After the worst year of my life I stand here broken but proud," she said in a speech.

"I still seek justice. I want to know what happened to his body. I want his friends to be released from jail. I want those in power to be held accountable for their actions."

Bezos gave a short speech directed at Cengiz, saying, "You need to know that you are in our hearts. We are here and you are not alone."

The case has sorely strained the ultra-conservative Saudi kingdom's ties with the West and tarnished the image of Crown Prince Mohammed bin Salman. The de facto ruler, who is widely known as MBS, had tried to project an image as a reformer.

"A year ago he had the great and good eating out of his hand," said David Hearst, chief editor of Middle East Eye, opening the memorial service.

"(But) Jamal's murder became a nightmare for his killer. In sealing Jamal's fate, Mohammad bin Salman, the Crown Prince of Saudi Arabia, sealed his own."

Eleven suspects have been put on trial in Riyadh over Khashoggi's murder, five of whom face the death penalty, but hearings are held behind closed doors and the names of the defendants have not been released.

Amnesty International's Andrew Gardner denounced the "sham" trial in Riyadh as "a mockery of justice".

"If he's serious, the crown prince and his government should provide transparency into the ongoing trial and reveal everything they know about the planning, execution, and aftermath of Khashoggi's murder," HRW's Middle East director, Sarah Leah Whitson, said.

A June report by UN Special Rapporteur Agnes Callamard said there was "credible evidence" linking MBS to the murder and an attempted cover up.

So far, however, no UN nation has heeded her call to initiate a full investigation.

"We will not stop until justice is served," Callamard said at the ceremony in Istanbul.

The Saudi crown prince has denied any involvement but tells PBS in a forthcoming documentary that he accepts responsibility for the killing, because it happened "under my watch".

The grisly details of Khashoggi's murder, which emerged largely from Turkish sources, sparked a global outcry and turned Prince Mohammad into a virtual pariah.

But the outrage has since dissipated and the Washington Post reported that global firms including Goldman Sachs, JPMorgan Chase and Citigroup were planning to send top executives to this year's event later this month.