Hundreds of Colombians protest in defence of peace deal 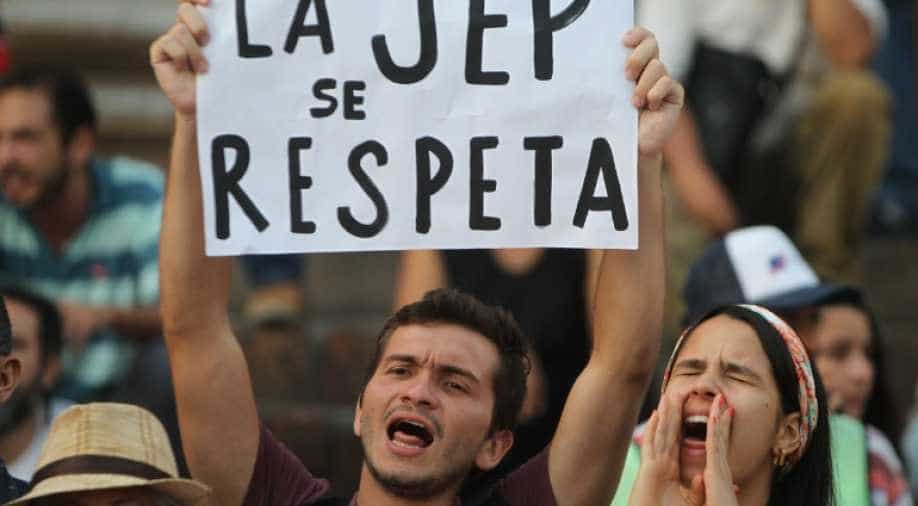 In the central Plaza de Bolivar in Bogota, about 500 people gathered, seeking to 'embrace peace'.

Demonstrations were held in different cities of Colombia Wednesday in defence of the Special Jurisdiction for Peace (JEP), considered the backbone of the peace agreement signed with the FARC (Revolutionary Armed Forces of Colombia), after president Ivan Duque objected to six articles of the peace legislation.

In the central Plaza de Bolivar in Bogota, about 500 people gathered, seeking to "embrace peace".

The attendees arrived at the square at dusk wearing white shirts, flags of the same colour and posters with phrases like "Such armed conflict does exist" and "They want to end the JEP because they fear the truth".

"Ordinary people do want peace and they feel that this attack on the JEP from the national government, headed by President Duque, is not only to the JEP itself but to the peace agreement," Luis Alberto Alban Urbano, better known as "Marcos Calarca", a parliamentarian of the House of Representatives from the Common Alternative Revolutionary Force, the successor party of the FARC, told Efe.

According to Alban, the president's objections "put the agreement at risk," which was signed in 2016.

At the same time, former vice-presidential candidate Angela Robledo, of the leftist movement Colombia Humana, insisted that "the JEP is the mechanism that allows access to truth and reparation," which is why she considered the agreement with the ex-combatants is currently in danger.

President Duque announced on March 10 that he will return the statute law of the JEP to the Congress, after objecting to six articles, on the grounds that they do not guarantee the application of the principles of truth, justice, reparation and non-repetition, which are part of the agreement with the FARC.

The aforementioned law was approved by the Senate and the House of Representatives in 2017 and then received the approval of the Constitutional Court, and the only procedure left was the presidential sanction, but the president decided to object partially.

In Medellin, the demonstration began in the Parque de las Luces with a small group of protesters who marched on the streets of the city centre under the slogan "peace is not to be objected, the JEP is to be respected", while the biggest gathering took was later when nearly 200 people joined at nightfall.

Among the attendees, most of them young people who sang the mantra "here is the generation of peace", were members of the FARC party that carried flags with messages demanding respect for the peace agreement and expressing the rejection of war.

Colombian opposition parties announced a national mobilization in support of the JEP for March 18.