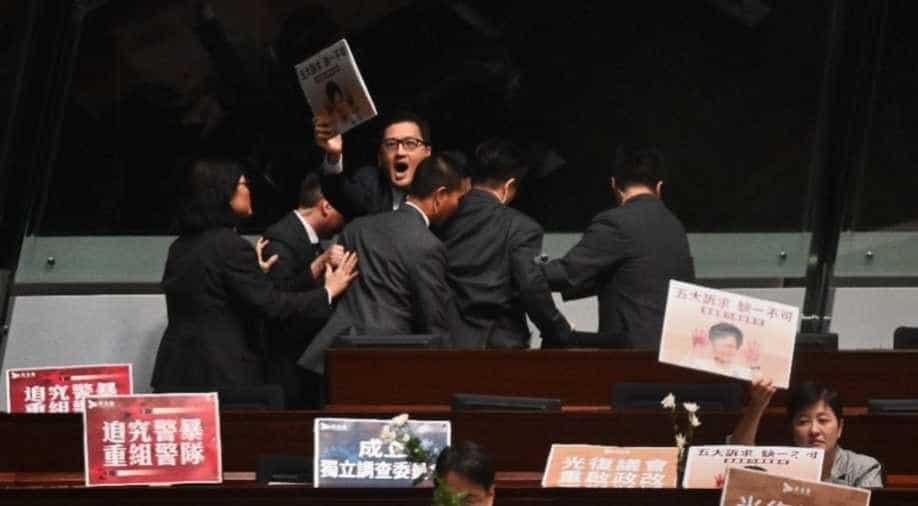 Chief Executive Carrie Lam has faced an outpouring of anger from her opponents since the legislature opened its doors for a new session on Wednesday, three months after the building was trashed by masked protesters.

Pro-democracy lawmakers were dragged out of Hong Kong's legislature by security guards on Thursday after they heckled the city's pro-Beijing leader for a second day running, the latest outburst of political rancour in the strife-torn city.

Chief Executive Carrie Lam has faced an outpouring of anger from her opponents since the legislature opened its doors for a new session on Wednesday, three months after the building was trashed by masked protesters.

Lam was unable to give a State of the Union-style policy speech on Wednesday after pro-democracy lawmakers, who form a minority on the pro-Beijing-stacked legislature, repeatedly interrupted her.

Instead, she was forced to deliver the address in a pre-recorded video.

Lam returned to the Legislative Council on Thursday to answer questions from lawmakers about the content of that policy speech.

But chaos erupted once again as her political opponents chanted slogans and were dragged one by one from the chamber.

Hong Kong has been rocked by the worst political unrest in decades.

Millions have taken to the streets, initially against a now-dropped bid by its leaders to allow extraditions to the authoritarian Chinese mainland.

But after Beijing and Lam took a hard line, the movement snowballed into a broader push for democracy and police accountability.

Violence has escalated on both sides of the political divide with hardcore protesters wielding petrol bombs and stones, and police responding with ever-increasing amounts of tear gas, rubber bullets and even live rounds in recent weeks.

A leading figure within Hong Kong's democracy movement said Thursday he was recovering after being set upon by a gang of hammer-wielding thugs, the latest assault on Beijing critics in Hong Kong.

Jimmy Sham, one of the protest movement's most recognisable faces, was left lying in a pool of his own blood late Wednesday after he was jumped by around five men in the district of Mong Kok.

"I will continue to fight for the five demands in a peaceful, rational and non-violent manner," Sham wrote on Facebook from his hospital bed.

Sham is the main spokesman of the Civil Human Rights Front, a group which advocates non-violence and organised a series of record-breaking, peaceful marches earlier this summer.

Hardcore pro-democracy protesters have also increasingly meted out their own street justice, beating people who vocally disagree with their goals or are viewed to be government loyalists.

Hong Kong's instability is fuelled by years of growing fears Beijing is eroding the city's unique freedoms, contrary to a deal that outlined Hong Kong's 1997 return to China from British colonial rule.

Lam, who was appointed by a pro-Beijing stacked committee and has historically low approval ratings, has struggled to end the political crisis.

Wednesday's policy speech was billed as an attempt to win hearts and minds after four months of seething pro-democracy protests.

But it was heavily criticised both by opponents and even her allies for offering little in the way of a substantive political solution.

Instead, Lam focused on economic gripes, vowing to increase housing and land supply in a city that has one of the least affordable property markets in the world, and announcing a handful of subsidies.

But she gave no political concessions to the democracy movement and said progress could only be made once violence from protesters ends.

Activists have said they will only end their huge rallies if core demands are met, including an independent inquiry into the police, an amnesty for the more than 2,500 people arrested and fully free elections.

Both Lam and Beijing have repeatedly dismissed those demands and say Hong Kong's freedoms are being protected.