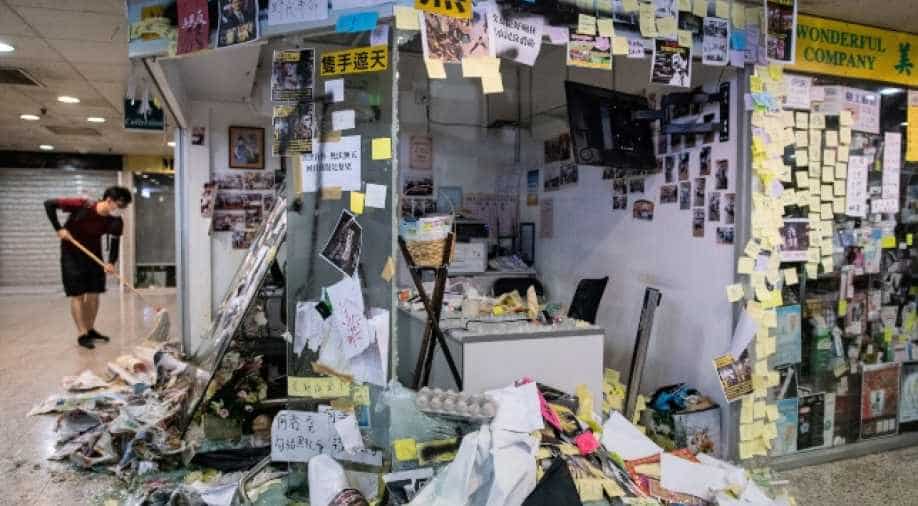 Public anger has been raging since last Sunday when a gang of men in white t-shirts, armed with poles and batons, set upon anti-government protesters and bystanders in a station and on a train, leaving at least 45 people needing hospital treatment.

Hong Kong has been plunged into its worst crisis in recent history after millions of demonstrators took to the streets -- and sporadic violent confrontations erupted between police and pockets of hardcore protesters.

The demonstrations were triggered by a controversial bill which would have allowed extraditions to mainland China but has evolved into a call for wider democratic reforms and a halt to sliding freedoms.

Saturday's rally will be held where last Sunday's attack took place in Yuen Long, a town in Hong Kong near the Chinese border where many of the surrounding villages are known for triad connections and their staunch support for the pro-Beijing establishment.

Police have been heavily criticised for being too slow to respond to Sunday's violence, fueling accusations of collusion or turning a blind eye to the pro-government mob -- allegations the force have denied.

But social messaging channels used to organise the largely leaderless movement have quickly filled up with vows from people to join in.

Some suggested holding a "shopping spree" in Yuen Long, others for a mass gathering of Pokemon Go, a popular mobile phone game.

Others suggested, sarcastically, it could be an occasion to mourn the death on Wednesday of notorious Chinese communist hardliner Li Peng, noting that religious gatherings do not need police permission.

Rumours have swirled that protesters might target the ancestral halls and graves of a village close to the Yuen Long's station where the white shirt mob ran into after their attack and later left without police making any arrests despite a large presence of officers.

Earlier this week the graves of Junius Ho's parents were vandalised. An ardent pro-Beijing lawmaker, Ho was seen shaking hands with the white-shirted men before Sunday's attack. He also threatened a pro-democracy lawmaker in an online video earlier this week.

That lawmaker, Eddie Chu, who also hails from the New Territories, said many villagers abhorred Sunday's attack but were afraid to speak out.

He used Facebook to call on fellow protesters not to target village halls and graves, saying such actions would backfire and unite sympathetic villagers against their protest movement.

Beijing has labelled the protests as "extreme illegal violence", but has left it to the city's semi-autonomous government to deal with the situation.

City leader Carrie Lam has shown no sign of backing down beyond agreeing to suspend the extradition bill. On Wednesday China issued a stark reminder that its army could be deployed in Hong Kong if city authorities requested support in maintaining "public order", something local authorities have said they have no intention of doing.

Two days later thousands held a 10-hour protest at the airport arrival hall in a bid to "educate" visitors, particularly mainlanders, about their movement. The protest was peaceful and there was no disruption to flights.

Police have allowed a rally to take place but denied protesters permission to march, raising the likelihood of further confrontations.