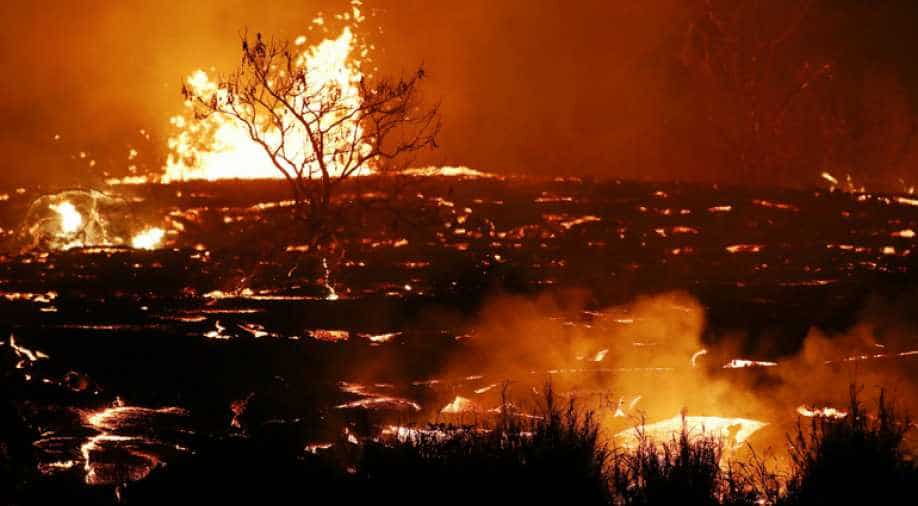 Helicopters were rushed in to rescue four trapped residents after lava flowing from Hawaii's Kilauea volcano isolated a cluster of homes, local officials said late Friday, one day after the volcano erupted and shot a huge plume of ash miles (kilometers) into the sky.

The lava is "isolating appx 40 homes in area," he wrote, adding that four people were "safely evacuated" by Hawaii County and National Guard helicopters.

"If you are still in area stay in safe place & await official instructions," Kim warned.

The US Geological Survey, which monitors volcanos and earthquakes worldwide, said via Twitter that "fast-moving lava flow from fissure 20 advancing at 300-400 yards (meters) per hour."

Kilauea is the world's most active volcano and one of five on Hawaii's Big Island.

It started erupting on May 3, prompting about 2,000 people to flee from their mountainside homes.

Scientists believe the volcanic activity may be a precursor to a major eruption similar to the one that shook the island in the mid-1920s.

But they say they expect no loss of life given that the most exposed residential areas have been evacuated and the region where the volcano is located -- on the southeastern part of the island -- is lightly populated.

So far, about 40 homes and other buildings have been destroyed by the red-hot lava that has been flowing from the volcano since early May.

Authorities have warned residents to stay away from the neighbourhoods evacuated, warning that toxic sulfur dioxide seeping out of nearly two dozen fissures could prove deadly.

Thursday's violent explosion within Kilauea's Halemaumau crater -- the biggest since the volcano became more active on May 3 -- produced a volcanic plume that reached 30,000 feet (9,000 meters) into the sky.