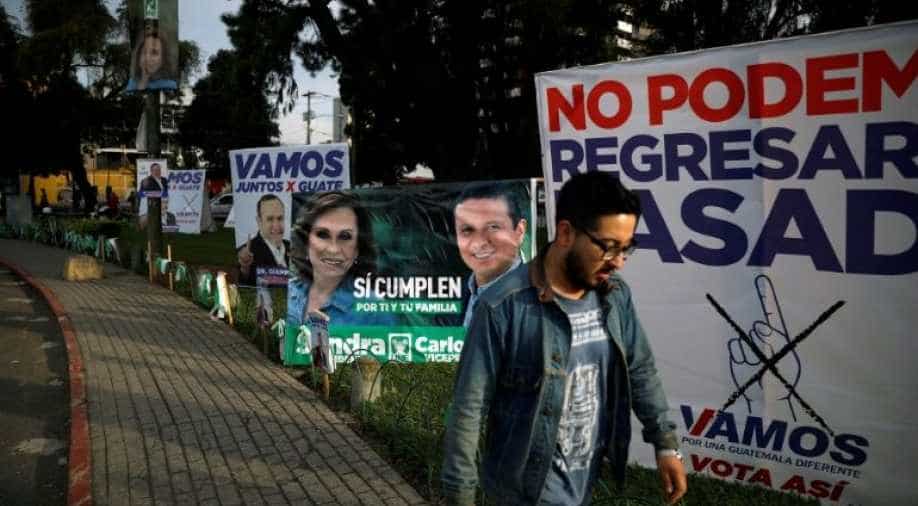 A man walks in front of a campaign signs, ahead of the second round run-off vote, in Guatemala City, Guatemala. Photograph:( Reuters )

Threatened with economic sanctions if it said no, the outgoing government signed an agreement in July to make Guatemala a so-called safe third country for migrants despite the endemic poverty and violence plaguing the Central American nation.

Guatemalans on Sunday elect a new president who will face a major challenge after the country agreed with Washington to act as a buffer against illegal immigration under pressure from US President Donald Trump.

Threatened with economic sanctions if it said no, the outgoing government signed an agreement in July to make Guatemala a so-called safe third country for migrants despite the endemic poverty and violence plaguing the Central American nation.

Voters must choose between conservative Alejandro Giammattei and his centre-left rival, former first lady Sandra Torres. Both veteran political campaigners have criticized the deal, but will probably be unable to do much to stop it.

Risa Grais-Targow, Latin America director at consultancy Eurasia Group, said while the agreement is facing a backlash in Guatemala, not honouring it would expose the country to the risk of taxes on remittances or tariffs on its goods.

"The next president faces a lose-lose situation when it comes to managing the deal with the United States," she said. "That is the biggest challenge the incoming president faces."

A CID-Gallup opinion poll of 1,216 voters conducted between July 29 and Aug. 5 gave Giammattei the advantage going into the run-off vote, with 39.5 per cent support, versus 32.4 per cent for Torres. The poll had a margin of error of 2.8 points.

Whoever takes office in January will inherit a country with a 60 per cent poverty rate, widespread crime, and unemployment, which have led hundreds of thousands of Guatemalans to migrate north.

Between them, the two candidates have failed to win the presidency five times. Polling suggests that although Torres came out on top in a first found of voting in June, her unpopularity may prove her undoing.

"I wasn't going to vote, but ... seeing the circumstances I better vote so that Sandra doesn't win," said Ricardo Son, an 84-year-old retiree in Guatemala City.

Many Guatemalans are fed up with the political class after corruption scandals led to the arrest of former President Otto Perez in 2015 and then threatened to unseat his successor, incumbent President Jimmy Morales, a former TV comedian.

Both candidates have vowed to fight corruption without "foreign interference," an apparent allusion to the International Commission Against Impunity in Guatemala (CICIG), the United Nations mission that brought down Perez and went after Morales.

Morales, who terminated the commission's mandate effective as of September, is barred by law from standing again. But his legacy could prove lasting if the migration deal he authorized becomes a defining feature of the next administration.

The accord will require migrants from Honduras and El Salvador to seek asylum in Guatemala rather than the United States. Critics question whether Guatemala has the resources to handle a potential surge in asylum applications.

Giammattei, a surgeon, has proposed the death penalty for some criminals and promised to erect an 'investment wall' on the border between Guatemala and Mexico to curb migration.

Torres wants to put troops on the streets to fight gangs, and use welfare schemes to alleviate poverty, a strategy she supported as the first lady between 2008 and 2011.