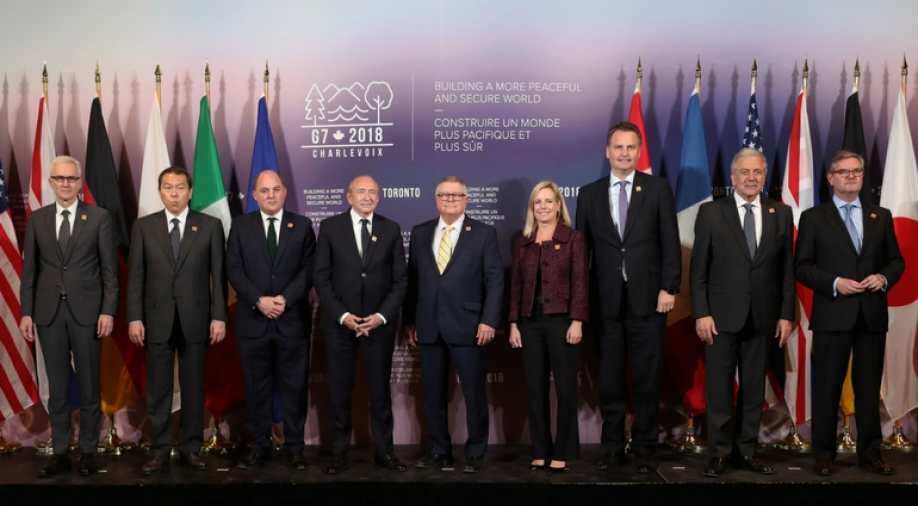 Foreign ministers from Group of Seven leading industrialized nations on Monday united to condemn Russia for what they called "a pattern of irresponsible and destabilising" behaviour and urged Moscow to help resolve the conflict in Syria.

The ministers agreed to create a working group to study Russia's "malign behaviour" and said they were working on a plan to improve coordination to push back against foreign interference in elections.

"We call on Russia to cease this behaviour, which is highly detrimental to prospects for constructive cooperation," the G7 foreign ministers said in a joint statement.

The two-day meeting in Toronto was meant to prepare for a G7 leaders' summit in Charlevoix, Quebec on June 7-8.

US intelligence agencies have said Russia meddled in the 2016 US presidential election campaign, and Russia is also blamed for a nerve agent attack on a former Russian spy in Britain last month, which the G7 statement strongly condemned. Moscow has denied involvement in either event.

"The G7 countries are committed to preventing, stopping and responding to foreign interference," she told a news conference at the end of talks.

"There are consequences for those who seek to undermine our democracies," she said, adding there was clear unity among G7 allies on Russia.

Later, Freeland told reporters the G7 would soon detail a plan on improved coordination among member states when faced with foreign interference.

"Coordinated action and cooperation are needed to build resilience and reinforce our democratic institutions and process against foreign interference by state and non-state actors," Freeland told reporters.

"There is a concern within the G7 countries that authoritarian states are actively working to undermine democratic systems ... today we said `enough is enough`," she added.

The challenge for the G7 is that it also needs Moscow`s help to resolve the crisis in Syria, where Russia and Iran are backing Syrian President Bashar al-Assad.

Acting US Secretary of State John Sullivan called on Moscow to stop creating impediments to peace in Syria and to play a role in ending the seven-year-long conflict.

"Russia must be a constructive partner in Syria or will be held accountable," he told reporters.

British Foreign Secretary Boris Johnson, speaking to reporters on the margins of the meeting, said G7 ministers had agreed on the need to be vigilant about Russia.

"What we decided ... was that we were going to set up a G7 group that would look at Russian malign behaviour in all its manifestations - whether it`s cyber warfare, whether it`s disinformation, assassination attempts, whatever it happens to be, and collectively try to call it out," he told reporters.

German Foreign Minister Heiko Maas said the meeting established "again that there will be no political solution in Syria without Russia ... and that Russia has to contribute its share to such a solution."

The G7 meeting is the first high-level gathering of the allies since the United States, France and Britain launched 105 missiles targeting chemical weapons facilities in Syria in retaliation for a suspected poison gas attack on April 7.

The Western countries blame Assad for the attack that killed dozens of people. The Syrian government and its Russian ally deny involvement or using poison gas on April 7.

While supporting the air strikes, the G7 statement said they were "limited, proportionate and necessary - and taken only after exhausting every possible diplomatic option to uphold the international norm against the use of chemical weapons."

Maas also said the leaders of France and Germany would urge US President Donald Trump in separate meetings this week not to pull out of an Iran nuclear deal with major powers.

Trump has given the European signatories of the deal a May 12 deadline to "fix the terrible flaws" of the 2015 nuclear agreement, or he will refuse to extend US sanctions relief on Iran.

The agreement offered Tehran relief from sanctions in exchange for curbing its nuclear programme.

"We accept that Iranian behaviour has been disruptive in the region, we accept the president has some valid points that need to be addressed, but we believe they are capable of being addressed (inside the deal)," said Johnson.

The G7 meeting took place several miles from where the driver of a van killed at least nine people and injured 16 when he ploughed through a busy Toronto sidewalk on Monday, according to police, hospital officials and a Reuters witness.