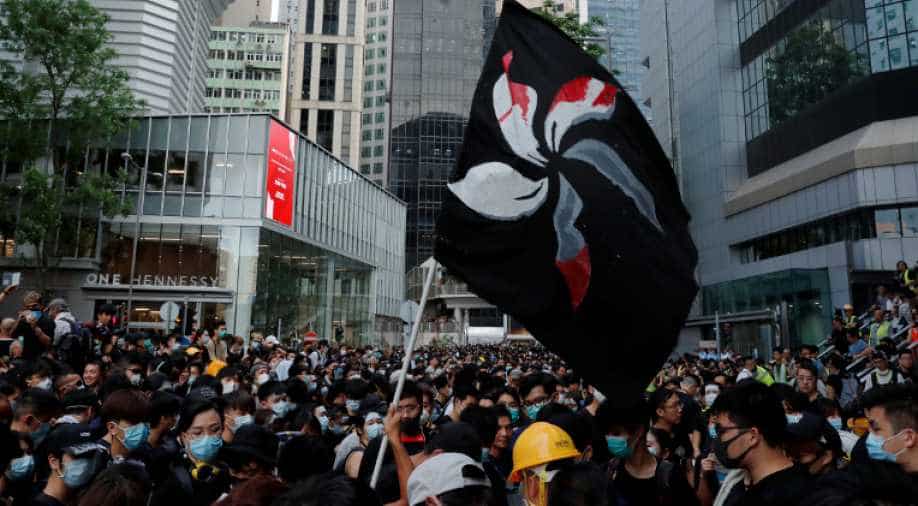 Millions have thronged the streets in the past three weeks to demand that the bill, which would allow criminal suspects to be sent to mainland China for trial in courts controlled by the Chinese Communist Party, be scrapped altogether

Protesters in Hong Kong blocked roads and forced workers to leave the justice secretary`s offices on Thursday in the latest unrest to rock the city over an extradition bill that has now been suspended.

Millions have thronged the streets in the past three weeks to demand that the bill, which would allow criminal suspects to be sent to mainland China for trial in courts controlled by the Chinese Communist Party, be scrapped altogether.

"You know what everybody has deep in their hearts - is that this is about our future and it`s very very personal," said 53-year-old Brian Kern, who was attending the protests.

Police formed a cordon to block the demonstrators and one officer held a banner warning them away. Minor scuffles broke out between pro-democracy group Demosisto and officers.

"Fight for Justice", "Free Hong Kong," and "Democracy Now" were some of the demands emblazoned on protest banners.

Police chief Stephen Lo warned of consequences for outbreaks of violence and condemned what he said was an environment of hostility making his officers` task difficult.

In the early hours, riot police wielding batons and shields chased dozens of protesters as they broke up a siege of police headquarters. By nightfall on Thursday, only around 200 protesters remained. Black-clad and masked, they sat peacefully outside government headquarters.

The demonstrators have seized on this week`s G20 summit of world leaders in Japan to appeal for Hong Kong`s plight to be put on the agenda, a move certain to rile Beijing, which has vowed not to tolerate such discussion.

"We know that the G20 is coming. We want to grasp this opportunity to voice for ourselves," said Jack Cool Tsang, 30, a theatre technician who took a day off work to protest.

Images of police firing rubber bullets and tear gas beneath gleaming skyscrapers this month near the heart of the financial centre grabbed global headlines and drew condemnation from international rights groups and protest organisers.

Hong Kong chief executive Carrie Lam, who has kept a low profile since her latest public apology over a week ago, bowed to public pressure and suspended the bill a day after the violent protests but stopped short of cancelling the measure outright and rejected repeated calls to step down.

Opponents of the extradition bill fear being placed at the mercy of a justice system rights group say is plagued by torture, forced confessions and arbitrary detentions.

The demonstrations, which pose the greatest popular challenge to Chinese President Xi Jinping since he took power in 2012, have repeatedly forced the temporary closure of government offices, blocked major roads and caused massive disruptions.

Since Hong Kong returned to Chinese rule in 1997, it has been governed under a "one country, two systems" formula that allows freedoms not enjoyed in mainland China, including the liberty to protest and an independent judiciary.

But many accuse China of increased meddling over the years, by obstructing democratic reform, interfering with elections, suppressing young activists, as well as being behind the disappearance of five Hong Kong-based booksellers who specialised in works critical of Chinese leaders.

ay, a Hong Kong government statement said Lam had met senior police officers to express thanks for their dedication during the protests and gave them her full support to maintain law and order in the city.

"She said she understands that members of the force and their family members have been put under pressure and that a small number of people even provoked the police intentionally, which is not acceptable," the statement said.

Lam also met representatives in the education and religious sectors, senior civil servants as well as foreign consuls to exchange views on the "current social situation," it said.