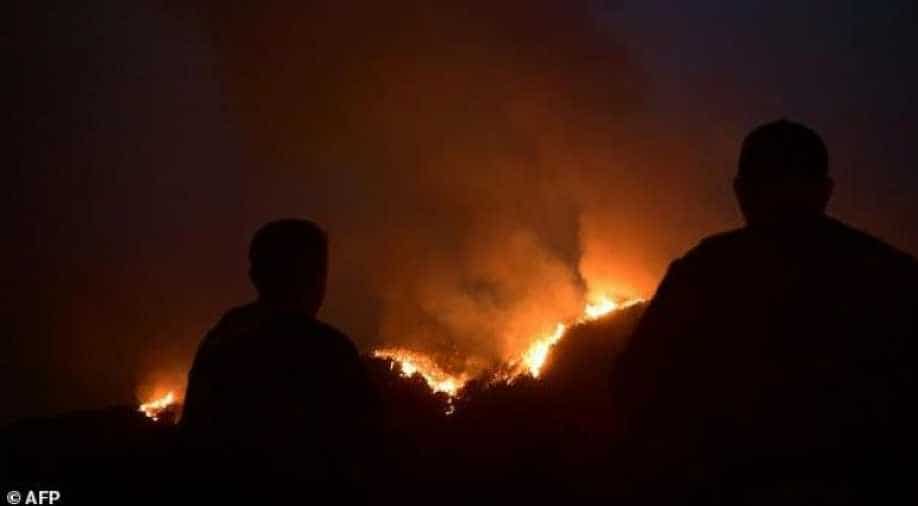 More than 8,000 people are involved in battling the blaze, which is now 40 percent contained. Photograph:( AFP )

Evacuation orders were issued Saturday for areas in California's Santa Barbara County as the state battles its third-largest wildfire since 1932, with winds and dry conditions threatening to help the blaze grow.

Santa Barbara's Office of Emergency Management announced a series of mandatory evacuation orders as well as voluntary evacuation warnings for parts of the county on its Twitter account.

The OEM said that "due to extreme traffic on the County Website it has shut down."

The so-called Thomas fire menacing Santa Barbara has already burned 259,000 acres (105,000 hectares) of land, destroyed over 1,000 structures and cost more than $100 million since it broke out on December 4, the California Department of Forestry and Fire Protection (Cal Fire) said.

More than 8,000 people are involved in battling the blaze, which is now 40 percent contained.

Cal Fire also warned that conditions were ripe for new wildfires to emerge.

"Over the weekend winds across northern California are expected to reach 30-40 MPH (48-64 kilometers per hour). Wildfires can strike anywhere at any time," it warned in a Facebook post.

Cal Fire's list of the top 20 largest wildfires in the state dates back to 1932, as earlier records "are less reliable, and this list is meant to give an overview of the large fires in more recent times," it says.

The Santiago Canyon Fire of 1889 reportedly burned 300,000 acres, which would make it the largest.

A series of fires broke out in California this month, most of which have since been contained.

The Thomas fire is the only one to have resulted in deaths.

San Diego-based Cal Fire engineer Cory Iverson died fighting the Thomas fire in Ventura County, while a 70-year-old woman was killed in an accident as she fled in her car.

This year is the worst on record for wildfire devastation in California.

California Governor Jerry Brown has said that the wildfires ravaging his state should serve as a warning to parts of the world threatened by climate change.

"The important fact is that these fires are going to become a very frequent occurrence. That's what the science is telling us," Brown said.

"It's a real indicator of bad things to come, and hopefully will serve to wake up people who right now are too complacent."