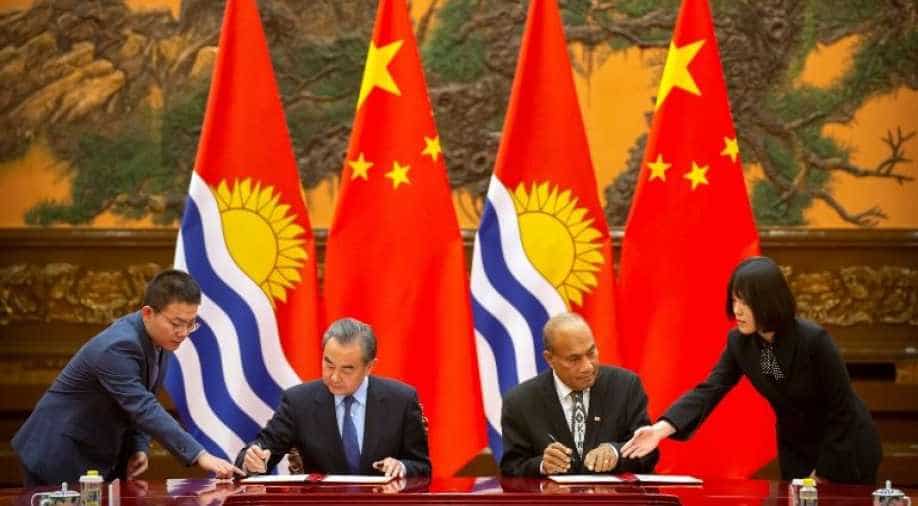 A senior Chinese diplomat said Beijing was "open" to all sorts of projects in Kiribati, an ex-British colony made up mainly of atolls in the central Pacific, in waters dominated by the United States and its allies since World War Two.

Beijing's growing influence may stroke US anxieties deeper as China on Monday hoped to expand its newly restored ties with the pacific state of strategic but mothballed Chinese space tracking station, Kiribati, as per reports.

A senior Chinese diplomat said Beijing was "open" to all sorts of projects in Kiribati, an ex-British colony made up mainly of atolls in the central Pacific, in waters dominated by the United States and its allies since World War Two.

Speaking to reporters after Chinese President Xi Jinping met Kiribati's President Taneti Maamau in Beijing, the diplomat, Lu Kang, did not respond directly to a question about whether Beijing planned to reopen the space tracking station.

"A lot of ideas, a lot of initiatives for joint ventures are still on the way," said Lu, who heads the Chinese Foreign Ministry's Department of North American and Oceanian Affairs.

"So long as any ideas that could benefit both sides, especially both peoples on both sides, definitely China is open to these kinds of ideas," he said, without elaborating.

China's space program is overseen by the military, which has so far declined to comment on the Kiribati facility.

China and Kiribati restored diplomatic ties last year after the Pacific state cut them with Taiwan. China considers Taiwan merely a Chinese province, with no right to state-to-state relations, and refuses to maintain diplomatic ties with countries that recognize Taipei.

Kiribati had established diplomatic relations with Taiwan in 2003, prompting the break with Beijing.

Up until then, China had operated a space tracking station in Kiribati, which played a role in tracking China's first manned space flight and is in a part of the world where the United States tests missiles and other military hardware.

A former Taiwanese ambassador to Kiribati, Abraham Chu, told Taiwan's Central News Agency last year that China had never fully removed the tracking station in Kiribati and that it "could come back at any time".

The Solomon Islands, another Pacific state, also switched to Beijing from Taipei last year, in a process watched with concern by Washington, which is wary of China's growing global clout.

Taiwan now has formal relations with just 15 countries, mostly small and poor nations in Latin America and the Pacific, including Nauru, Tuvalu, and Palau. China has signaled it is coming for the rest of Taiwan's allies.