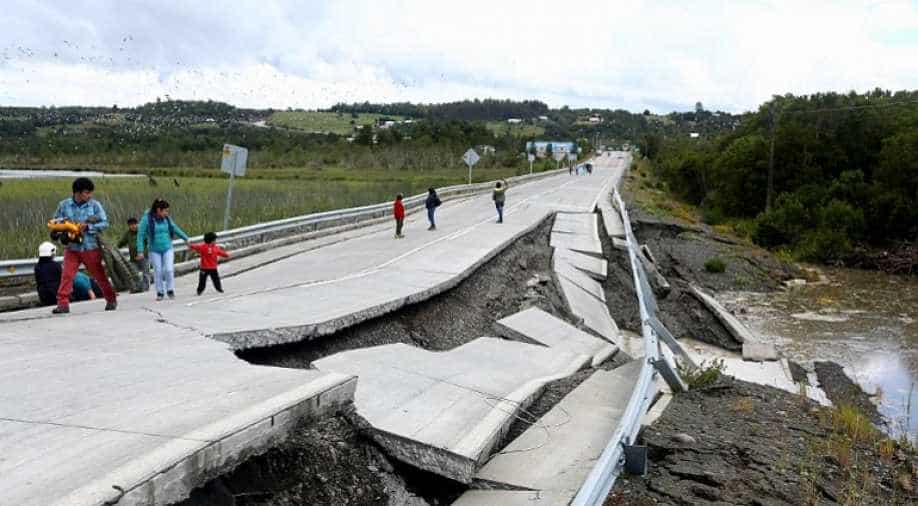 The public however was told to stay away from beaches because of the risk of bigger-than-usual waves and currents. Photograph:( AFP )

A strong Christmas Day quake rattled southern Chile on Sunday, triggering initial tsunami fears and evacuations, but no deaths were reported and damage was minor.

The tsunami alert, however, was lifted about 90 minutes after the powerful quake shook the South American nation.

The quake registered 7.7 on the Moment Magnitude scale according to seismologists at the US Geological Survey. Chile's national emergencies office ONEMI put it at 7.6.

The epicentre of the shallow quake was on the southern part of Chiloe island, in a zone of several national parks.

Authorities issued a tsunami alert immediately after the trembler, with people on the southern coast urged to flee to higher ground.

But that was later downgraded to a "state of precaution," according to ONEMI chief Ricardo Toro. The public was still told to stay away from beaches because of the risk of bigger-than-usual waves and currents.

"There was no loss of human life" according to early reports, ONEMI said.

Electricity and phone lines were briefly cut to some communities, and media showed images of cracked and cleaved roads.

The mayor of the town of Ancud, Carlos Gomez, told Chilean television network Canal 13 that falling objects had caused some damage.

But hours later, "everything was back to normal," he said.

Chile's president, Michelle Bachelet, sent "strength and thoughts to our compatriots affected by the quake in Chiloe" on her Twitter feed.

ONEMI said around 4,000 people had been evacuated from one town, Los Lagos.

The closest population center to the quake was Castro, a town on Chiloe island of 40,000 inhabitants. Chile's capital Santiago was around 1,000 kilometers (600 miles) from the epicenter.

"The earthquake hit us as we were having breakfast and we immediately ran out of the house because of fears of a tsunami," one man who fled with his family told Chilean television.

The quake struck as Chileans were with their families celebrating Christmas. All shops were closed.

Chile is in a quake-prone region, lying on the so-called Pacific Ring of Fire of frequent seismic activity. As a result, buildings are usually built to survive swaying.

The last big quake to shake Chile was in September 2015, when an 8.3 temblor followed by a tsunami hit the north of the country, killing 15 people. A coastal evacuation order had limited the number of casualties.

In 2010 another quake measuring 8.8, also followed by a tsunami, struck the center and south of the country, killing more than 500 people.