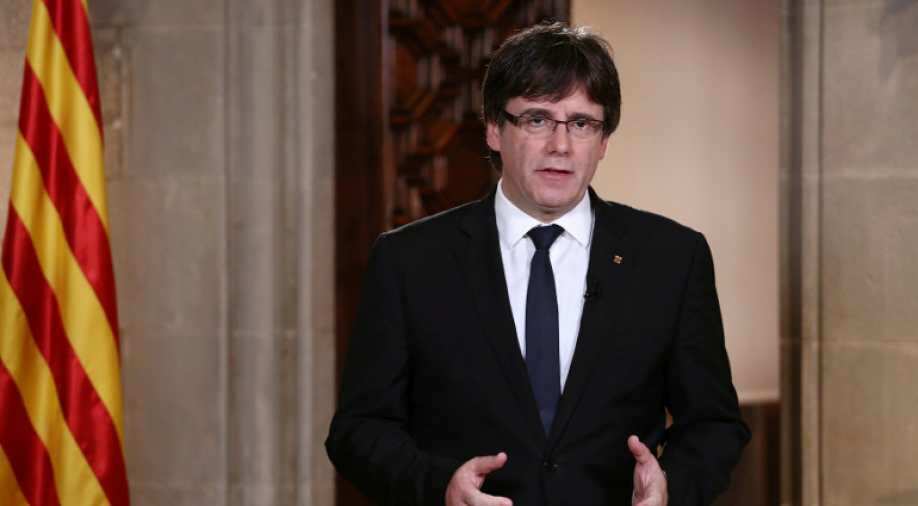 Catalonia's secessionist leader faced increased pressure on Monday to abandon plans to declare independence from Spain, with France and Germany expressing support for the country's unity.

The Madrid government, grappling with Spain's biggest political crisis since an attempted military coup in 1981, said it would respond immediately to any such unilateral declaration.

A week after a vote on independence which the government did its utmost to thwart, the tension also took its toll on the business climate of Spain's wealthiest region.

Three more Catalonia-based companies joined a business exodus from the region that has gathered steam since the October 1 referendum.

Property group Inmobiliaria Colonial and infrastructure firm Abertis both decided to relocate their head offices to Madrid and telecoms firm Cellnex said it would do the same for as long as political uncertainty in Catalonia continued.

Publishing house Grupo Planeta said it would move its registered office from Barcelona to Madrid if the Catalan parliament unilaterally declared independence.

Spain's finance minister said it was the Catalan government's fault the companies were leaving.

Regional leader Carles Puigdemont is due to address the regional parliament on Tuesday afternoon and Madrid is worried it will vote for a unilateral declaration of independence.

Catalan officials say people voted overwhelmingly for secession in the October 1 referendum, which had been declared illegal by the government. Some 900 people were injured on polling day when police fired rubber bullets and stormed crowds with truncheons to disrupt the voting.

The issue has deeply divided the northeastern region as well as the Spanish nation. Hundreds of thousands of people demonstrated against breaking away in Barcelona at the weekend. They say the referendum did not show the true will of the region because those who want to stay in Spain mainly boycotted it.

Buoyed by the show of support, Spanish Deputy Prime Minister Soraya Saenz de Santamaría said on Monday: "I'm calling on the sensible people in the Catalan government ... don't jump off the edge because you'll take the people with you."

"If there is a unilateral declaration of independence there will be decisions made to restore law and democracy," she told COPE radio station.

Underlining conflicting pressures on Puigdemont, the small, anti-capitalist Popular Unity Candidacy (CUP) party, which has an outsized influence on his government, said the outcome of the vote must be applied.

"We don't want to hold up the declaration of the Catalan Republic," CUP lawmaker Benet Salellas told a news conference.

European heavyweights Germany and France weighed in against a split.

France said it would not recognise Catalonia if the region unilaterally declared independence. If secession were recognised it would lead to Catalonia's automatic exit from the European Union, a French junior minister said.

"This crisis needs to be resolved through dialogue at all levels of Spanish politics," France's European affairs minister Nathalie Loiseau said.

The European Union has shown no interest in an independent Catalonia, despite an appeal by Puigdemont for Brussels to mediate in the crisis.

Under Catalonia's referendum law, deemed unconstitutional by Madrid, a vote for independence in the assembly on Tuesday would start a six-month process envisaging divorce talks with Spain before regional elections and a final act of separation.

Opposition Socialist leader Pedro Sanchez said he would "support the response of the rule of law in the face of any attempt to break social harmony", but stopped short of explicitly saying his party would back dissolving the regional parliament.

Barcelona Mayor Ada Colau advised Puigdemont against proclaiming independence on the basis of the referendum results and she urged Rajoy to rule out suspending Catalonia's autonomy.

Losing Catalonia, which has its own language and culture, would deprive Spain of a fifth of its economic output and more than a quarter of exports.

The crisis has reopened old divisions in a nation where the right-wing dictatorship of General Francisco Franco is a living memory easily revived by strong displays of nationalism.

A spokesman for the ruling People's Party (PP) invoked the memory of former Catalan leader Lluis Companys, who was arrested for declaring independence in 1934 and later executed.

"We hope they don't declare anything tomorrow, because anyone doing so might end up like him 83 years ago, in prison," Pablo Casado told a news conference in Madrid.

Many moderate Spaniards, including in Catalonia, oppose a breakaway. Regional authorities say about 90 percent of votes in the referendum were for secession, but turnout was only 43 percent.

Puigdemont appeared resolute on Sunday, saying the referendum law called for a declaration of independence in the event of a "yes" vote. "We will apply what the law says," he told TV3.

Catalonia's High Court asked for more security, specifically drafting in the national police, who were called in to stop the referendum when the Catalan police force failed to act.

Puigdemont said on Sunday he had not been in contact with the Madrid government for some time because it refused to discuss independence.

"What is happening in Catalonia is real, whether they like it or not. Millions of people have voted, who want to decide. We have to talk about this," he said.

Rajoy has said repeatedly he will not talk to the Catalan leaders unless they drop their plans to declare independence.