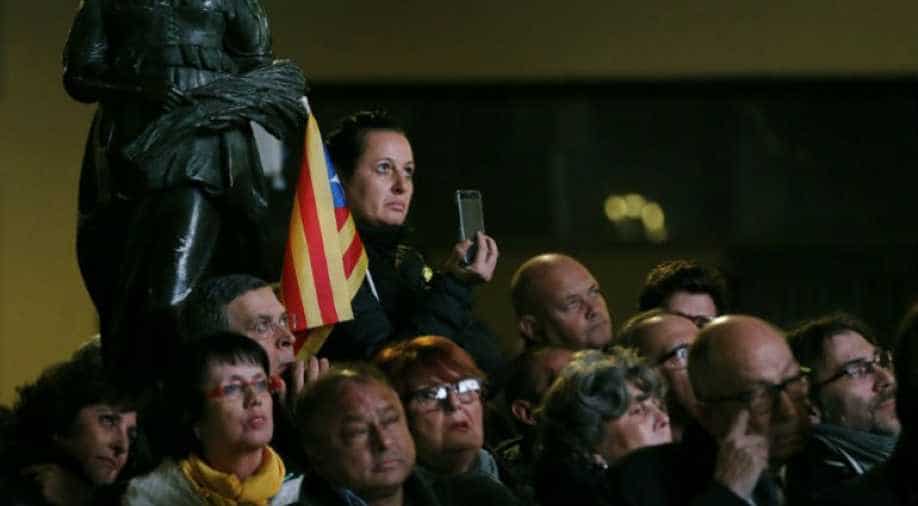 People attend the 'Junts per Catalonia' (All for Catalonia) grouping final campaign meeting for the upcoming Catalan regional election on December 19, 2017 in Barcelona. Photograph:( AFP )

Catalonia heads into a 24-hour campaigning blackout on Wednesday on the eve of a knife-edge vote, a potential turning point in the Spanish region's hotly disputed independence crisis.

Thursday's regional election pits leaders of the wealthy northeastern region's separatist movement against candidates who want to stay part of a unified Spain.

Voters are highly mobilised and a record turnout is expected, but with pro- and anti-independence candidates neck-and-neck in opinion polls neither side is likely to win a clear majority.

The election is being closely watched across a European Union still reeling from Britain`s shock decision to leave and wary about any breakup of the eurozone's fourth largest economy.

It has inflamed passions not just in Catalonia but across Spain, whose government took the unprecedented step of stripping the region of its autonomy after its parliament declared independence on October 27.

"This is not a normal election," axed Catalan leader Carles Puigdemont told supporters Tuesday evening in a final, virtual rally via videolink from self-imposed exile in Belgium.

"What is at stake is not who gets the most votes, but whether the country (Catalonia) or (Spanish Prime Minister Mariano) Rajoy wins" the standoff, he added.But with their camp in disarray, secessionists would likely put their independence drive on hold should they win Thursday`s vote.

"Even if a pro-independence government is formed it will be very cautious how it acts because it won`t want to lose the restored authority the Catalan government has," Andrew Dowling, contemporary historian in Hispanic studies at Cardiff University, told AFP.

"It won't want to see that suspended again," he added.

The deposed government's failed independence declaration saw more than 3,000 companies relocating from the region, and no country recognising the new "republic".

While opinion polls suggest a narrow lead for the leftist, pro-independence ERC, voters could ultimately hand victory to centrist party Ciudadanos, whose charismatic candidate Ines Arrimadas has campaigned on a fierce anti-nationalist ticket.

She is fighting to replace Puigdemont, who is wanted by the Spanish courts on charges of sedition, rebellion and misuse of public funds for his role in the independence drive.

"We are very close to making our dream come true," Arrimadas told supporters at a Tuesday rally in a working-class district of Barcelona.

"We are going to wake up from this nightmare on Thursday," she added.

"We don't want a republic," he said. "We want to be united with Spain."In another surreal twist to the Catalan election campaign, Puigdemont`s former deputy, Oriol Junqueras, has been campaigning from jail, with his ERC party running on its own ticket.

Now the separatists are not just fighting pro-unity parties for votes - but each other.

Allowed just 10 phone calls a week from jail, Junqueras has led an unorthodox campaign, giving interviews to Catalan radio and sending articles, letters and even poems to supporters.

Junqueras's supporters gathered at the prison outside Madrid where he is being held Tuesday to demand his release.

From there, they travelled to Junqueras`s hometown near Barcelona, Sant Vicenc dels Horts, for a final rally.

"They (the government) did not allow Oriol Junqueras to take part in the electoral campaign because they're afraid," his deputy Marta Rovira told a gathering of some 2,000 supporters who chanted "freedom!"

"What is this about, throwing ideas behind bars? This is not our republic!" she added.The Catalan crisis came to a head on October 1, when the now deposed government held a referendum on independence despite a court ban.

The vote was marred by a brutal police crackdown and triggered Spain`s worst political crisis in decades.

Neither separatist nor pro-unity parties are predicted to win a decisive majority in the 135-seat parliament, which could lead to lengthy negotiations to form a regional government.