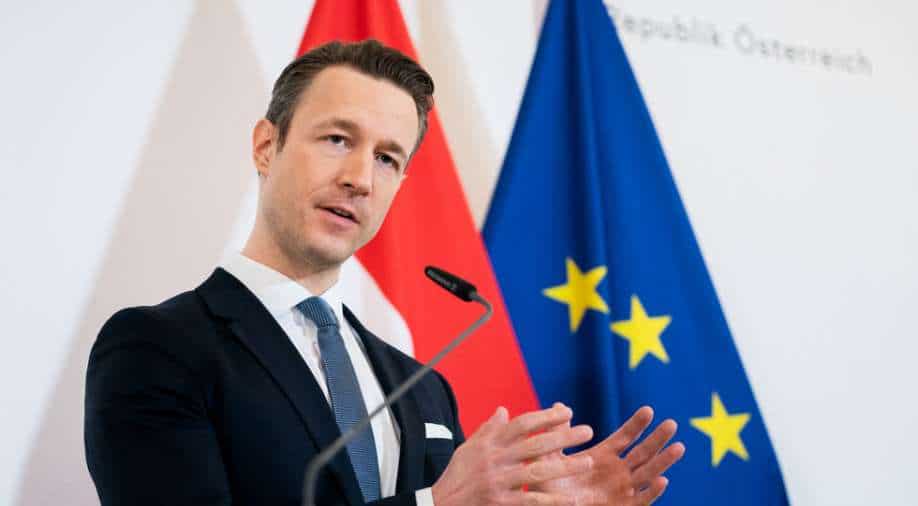 The specialised anti-corruption prosecutors' department said in a statement that it was investigating Finance Minister Gernot Bluemel and two other suspects over possible corruption and bribery offences.

The house of one of the ministers closest to Austrian Chancellor Sebastian Kurz was searched Thursday as part of a probe into possible party financing offences, prosecutors said.

The specialised anti-corruption prosecutors' department said in a statement that it was investigating Finance Minister Gernot Bluemel and two other suspects over possible corruption and bribery offences.

The probe relates to possible illicit payments from a gambling company to the centre-right People's Party (OeVP), to which Kurz and Bluemel both belong, in return for "help... with tax liability that the business was facing abroad", according to the prosecutors.

Bluemel said the probe had to do with alleged donations from Austrian gambling giant Novomatic but denied that the OeVP had ever received any funds from the company.

Prosecutors said searches had been carried out at "several private and business addresses".

The Der Standard daily reports that at the time of the alleged discussion of a donation in 2017, Novomatic was facing the prospect of tens of millions of euros' worth of fines from authorities in Italy.

That was the same year Kurz took over the leadership of the OeVP while serving as foreign minister, before leading the party to victory in elections that autumn and becoming chancellor.

Bluemel held several senior positions in the Vienna section of the party at the time.

Bluemel confirmed in a statement sent to AFP that he had had "a good conversation at a pre-arranged appointment" at the prosecutors' headquarters.

"Of course at the house search which followed the interview I supplied all the requested documents and electronic devices," he added.

Bluemel, who denies all wrongdoing, is seen as close to Kurz and recently made an unsuccessful bid for mayor of Vienna as the OeVP candidate.

All the main political opposition parties have demanded Bluemel's resignation but the OeVP's junior coalition partners the Greens have been more circumspect.

The Novomatic investigation is one of several that have grown out of the so-called "Ibizagate" scandal which brought down Kurz's first government, a coalition with the far-right Freedom Party (FPOe).

The scandal erupted in May 2019 when a video emerged showing the then leader of the FPOe and Vice Chancellor Heinz-Christian Strache appearing to offer public contracts to a woman posing as a wealthy Russian in return for election campaign help.

During that conversation Strache was heard suggesting that Novomatic "pays everyone".

The company denies any impropriety and Strache withdrew the remarks.

The scandal lead to early elections in autumn 2019 in which the OeVP emerged strengthened, profiting from a collapse in the FPOe's vote share.