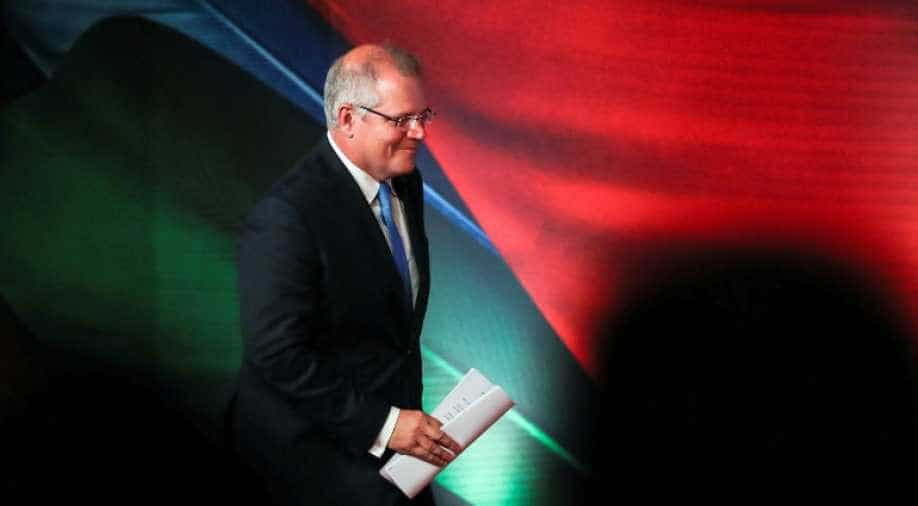 At the campaign launch in Melbourne, Morrison's focus was on economic management and said his centre-right Liberal-National coalition would support the 'decent, simple and honest aspirations' of Australians.

Australia's Prime Minister Scott Morrison officially launched his party's election campaign on Sunday, less than a week before the May 18 vote that opinion polls have consistently indicated he will lose.

At the campaign launch in Melbourne, Morrison's focus was on economic management and said his centre-right Liberal-National coalition would support the "decent, simple and honest aspirations" of Australians.

"A stronger economy where people have the confidence to invest more, to employ more, to invent more, to work hard," Morrison said.

The government has been trailing the centre-left Labor Party, led by Bill Shorten, in polls for years, though recent figures indicate the race is tightening.

Morrison's Liberal Party has been rocked by division in recent times, having had three different leaders in four years.

Neither of Morrison's two immediate predecessors as prime minister, Malcolm Turnbull and Tony Abbott, were present at the campaign launch. Former Prime Minister John Howard, who led Australia from 1996 to 2007, also did not show up.

Morrison previously dismissed questions about why the former prime ministers wouldn't be attending, saying the day was about speaking directly to the Australian people.

"It's not about party festivals and slapping backs and doing all that sort of stuff," Morrison told reporters on Saturday.

Morrison has been the dominant figure for the government in the campaign but members of his front bench attended the launch on Sunday, including Environment Minister Melissa Price, who has largely been unseen during a campaign in which climate change has been a prominent issue.

The coalition has had to focus its attention on many traditionally safe seats this election, which appear to be under threat from candidates running on platforms focused on more action on climate change.

The Age newspaper reported on Sunday the government was facing tight contests in Tony Abbott's seat of Warringah in Sydney and the seat of Higgins, in Melbourne's wealthy inner-east.

Labour leader Bill Shorten said there were a lot of disillusioned voters in Higgins, which the Liberal Party has held since the seat was created in 1949.

"There is a mood for change," Shorten told the Australian Broadcasting Corporation.

Morrison also took aim at Shorten and said Labor had a history of poorly managing the economy.

"Reckless spending is not a vision ... it’s a burden on current and future generations," Morrison said.