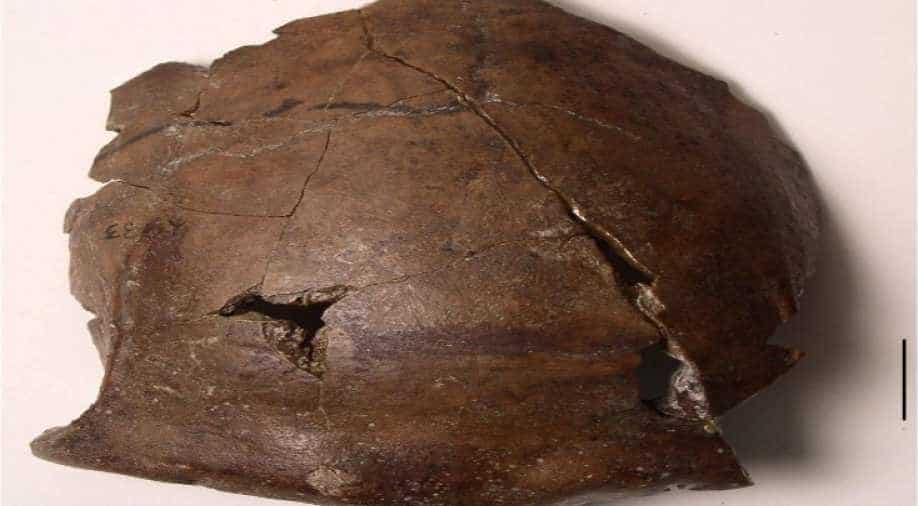 The skull of a person who lived in what's now Papua New Guinea, 6,000 years ago is an oldest-known tsunami victim Photograph:( Reuters )

"We also employed chemistry and examined the size of sediment grains," finding they were indicative of a tsunami, said anthropologist-archaeologist Mark Golitko of the University of Notre Dame

A mysterious partial skull unearthed in Papua New Guinea in 1929 that once was thought to belong to an extinct human species now turns out to have another unique distinction. Scientists believe it belongs to the oldest-known human tsunami victim.

Researchers said on Wednesday that new examinations of the sediments where the 6,000-year-old skull was found detected hallmarks of a tsunami, with a composition remarkably similar to the remnants of a deadly 1998 tsunami that lashed the same area.

The skull was discovered near the town of Aitape, about 7 miles (12 km) inland from Papua New Guinea's northern coast. It is one of the earliest human remains from the island of New Guinea, and initially was mistaken for a species called Homo erectus that died out about 140,000 years ago. Later scientific dating revealed it was actually 6,000 years old.

"As probably the oldest-known tsunami victim in the world, the Aitape skull speaks volumes about the long-term exposure of human populations along the world's coastlines and how such events in the past will have undoubtedly had fundamental effects on human migration, settlement and culture," said tsunami expert James Goff of the University of New South Wales in Australia.

The scientists examined geological deposits at the river-bed site where the skull was found, identifying clear signs of tsunami activity. They spotted microscopic organisms from the ocean in the sediment, similar to those found in soil after the 1998 tsunami.

"We also employed chemistry and examined the size of sediment grains," finding they were indicative of a tsunami, said anthropologist-archaeologist Mark Golitko of the University of Notre Dame in Indiana and the Field Museum in Chicago.

The 1998 Papua New Guinea tsunami killed more than 2,000 people, wiped out villages, destroyed crops and forced many survivors to relocate. The tsunami 6,000 years ago apparently was similar.

"Much like the 1998 tsunami, we suspect that one or more large waves very suddenly impacted the coast, washing near-shore villages and anyone living there further back into swamps and lagoons that dot the coast," Golitko said.

The skull was found without other bones. The researchers noted that in the 1998 tsunami, many victims were washed into lagoons and their bodies scavenged by crocodiles.

The research was published in the journal PLOS ONE.