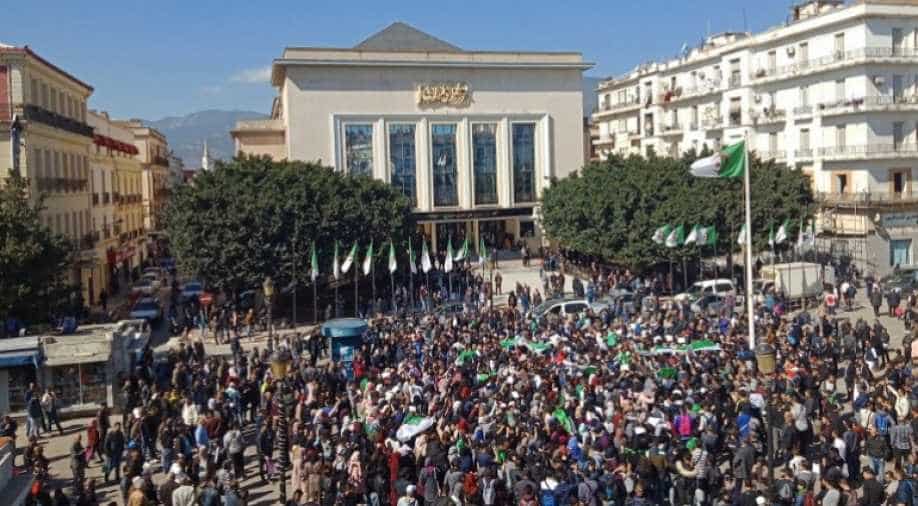 Algerians participate in a protest rally against ailing President's bid for a fifth term in power. Photograph:( AFP )

The trial is the first resulting from sweeping investigations into graft allegations launched after the resignation of former president Abdelaziz Bouteflika in the face of mass protests in April.

The accused face charges ranging from money laundering to abuse of office and granting undue privileges in the vehicle assembly industry.

The trial had been adjourned on Monday and the defence vowed to boycott further hearings, criticising the case as "politicised" and marred by a climate of "settling accounts".

Lawyer Mohamed Madjdoub, speaking on behalf of the defence, told the judge that "conditions... do not allow for lawyers to accomplish their mission and therefore, I inform you that the defence has decided to boycott the trial".

The judge asked the lawyers to leave the small, crowded courtroom and said the proceedings would continue.

The nascent Algerian automotive sector got its start in 2014, via partnerships between foreign groups and large Algerian corporations, often owned by businessmen linked to Bouteflika's entourage.

Two former prime ministers who served under Bouteflika appeared as defendants on Wednesday: Ahmed Ouyahia, an unpopular four-time former government head, and Abdelmalek Sellal, who was premier from 2014 to 2017.

It is the first time since Algeria's independence from France in 1962 that former prime ministers have been put on trial.

The two men argued that the court was not competent to try them, the constitution stipulating that crimes and infractions committed by prime ministers while in office fell under a "High Court of State".

But the organic law to establish this court was not passed and the prosecutor responded that they had to answer for their actions before the ordinary court.

He was charged with favouring certain manufacturers in the automotive sector -- even if they did not fulfil brief specifications -- to the detriment of competitors.

"There is no misappropriation (of public funds) and the choice... was based on the market. These manufacturers were already present and we wanted to keep them", the former prime minister said in his defence.

Sellal also flatly denied all the charges against him, saying he had had "no authority" over his ministers but only a "coordination" role as premier.

Former ministers Bedda Mahdjoub (industry and mines), Youcef Yousfi, who succeeded him in the post, and Abdelghani Zaalane (public works and transport) are other defendants in the case.

Zaalane was questioned over charges related to "secret" financing of Bouteflika's campaigns.

The former minister said that while he was Bouteflika's campaign manager for nine days in March 2019, he was aware of donations from five businessmen amounting to 750 million dinars ($6.2 million), well above the legal campaign spending cap.

The 54-year-old businessman is also the founder and CEO of private construction firm ETRHB.

Among the other businessmen being tried is former FCE vice president Mohamed Bairi, CEO of the Ival group, which owns industrial vehicle plant Iveco.

Ahmed Mazouz, president of the eponymous group that assembles and distributes Chinese-brand vehicles in Algeria, and Hassane Arbaoui, head of Global Group which runs an Algerian factory for South Korean company Kia, are also defendants.

The trial is set to continue on Thursday.