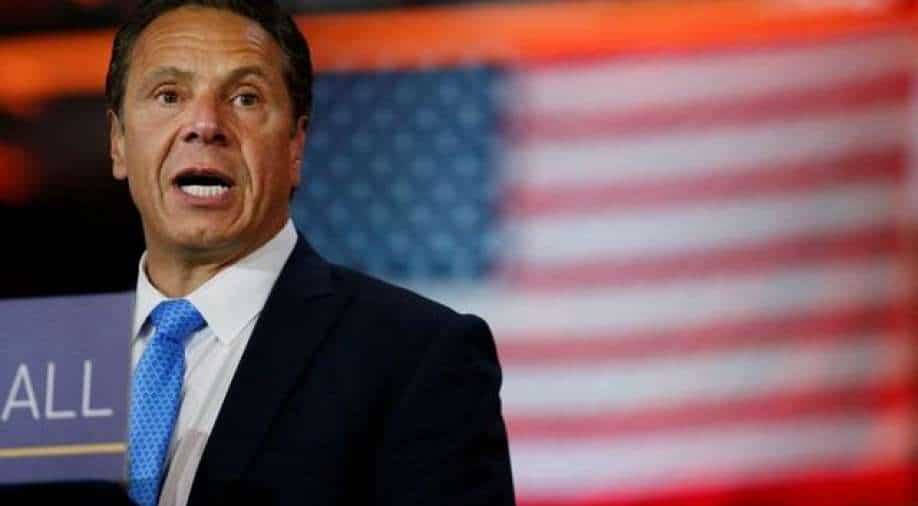 The filing of the lawsuit, which coincided with New York Democrats overwhelmingly endorsing Cuomo’s successor, Gov. Kathy Hochul, as their nominee in this year’s election, was a reminder that he still faces potential legal jeopardy over the events that hastened his resignation in August. Photograph:( Reuters )

As three women stepped forward with claims of sexual harassment and other unwanted advances by Cuomo, the most visible governor in America effectively went dark.

When Gov. Andrew Cuomo came under fire just a few weeks ago over his handling of nursing home deaths in the pandemic, he and his top advisers followed their usual playbook to stem the fallout: They worked the phones, pressing his case in private calls to legislators and other New York Democrats.

Then came a crisis that Cuomo’s signature blend of threats, flattery and browbeating could not mitigate. And he seemed to know it.

As three women stepped forward with claims of sexual harassment and other unwanted advances by Cuomo, the most visible governor in America effectively went dark.

After one of the women detailed her accusations against the governor in a Medium post, state Sen. Liz Krueger, a Manhattan Democrat, decided that she would come out with a statement calling for an independent investigation — an implicit rebuke of Cuomo. She reached out to the governor’s team to alert them, aware of the typical angry response.

No call came, she said.

“None of my colleagues have said they have heard from the governor on this,” Krueger said of the harassment accusations.

At the greatest moment of political peril for Cuomo in his decade in power, interviews with nearly two dozen Democratic lawmakers, strategists and Albany veterans paint a portrait of a governor who is increasingly isolated.

Cuomo faces a federal inquiry into his administration’s handling of nursing home deaths during the pandemic and an independent investigation into the harassment allegations, making his political path forward more challenging by the day.

On Friday, the state Legislature, which is controlled by Democrats, passed legislation to significantly curtail Cuomo’s vast emergency powers. When the governor appeared to suggest that he had played a role in the bill’s formulation, Assembly Speaker Carl Heastie — not prone to criticizing Cuomo — immediately shot that down, pointedly saying in a statement that “we did not negotiate this bill with the governor.”

Other lawmakers on Friday escalated their calls to reprimand the governor, demanding investigations, impeachment proceedings and even resignations, after The New York Times reported that his administration had rewritten a report to obscure the full extent of nursing home deaths.

“If true, everyone involved in lying to the public and to the Legislature must resign immediately,” said state Sen. Rachel May, a Democrat from Syracuse. “And that includes the governor.”

It is an extraordinary turnaround for the man who was former President Donald Trump’s most prominent foil in the early months of the pandemic and whose power in New York appeared nearly unassailable as 2021 began.

Some people who have spoken to Cuomo in recent days have described him as shaken by the speed with which the political fallout arrived, with dueling scandals and reports of his bullying behavior all converging, very publicly, at once. Others have questioned whether he grasped the gravity of his circumstances.

But the rapidly unfurling crises, they said, have been especially challenging for a governor who has always sought to be in control. Now he is at the whims of often-fickle public opinion, fuming legislators and investigations.

Amid mounting scrutiny and nine days without a news conference, Cuomo picked Wednesday to emerge, one week after Lindsey Boylan, one of two former aides to speak out, detailed her accusations — which the governor has strenuously denied.

His appearance followed strategy sessions with a small circle of trusted loyalists at the governor’s mansion, amid internal deliberations about both the substance of his remarks and how to manage the delivery and tone on a sensitive subject, according to people who have been in touch with the team.

The result Wednesday was an uncharacteristically rattled chief executive who delivered an emotional apology for his conduct but insisted that he had never “touched anyone inappropriately” and that he did not intend to resign.

“Palace intrigue aside, there’s a job to be done, and New Yorkers elected the governor to do it,” a spokesperson for the governor, Richard Azzopardi, said in a statement. “Which is why he has been focused on getting as many shots in arms as possible, making sure New York is getting its fair share in Washington’s COVID relief package and working on a state budget that is due in three weeks.”

People who have been in touch with Cuomo’s team described some staff members — in particular, younger ones — as demoralized and exhausted as a series of controversies play out on top of a year of navigating COVID-19 in an exceptionally demanding environment.

Several staff members have departed his office in recent days, citing a variety of reasons. Among those who have left are Gareth Rhodes, who served as a member of the state coronavirus task force and was a frequent guest star during Cuomo’s news briefings, and members of his press team.

As the Legislature heads into high-stakes budget negotiations, even Cuomo’s traditional allies acknowledge that his influence has taken a hit.

“It’s made his job more difficult,” said Jay Jacobs, the New York State Democratic Party chair, who said he had spoken with Cuomo on Thursday. “When you’re under this kind of pressure, that’s going to influence the amount of, the degree of, your political strength.”

Jacobs seems to be the relatively rare political figure who has discussed the accusations with Cuomo directly. As the allegations unfolded, Cuomo’s team denied wrongdoing and issued statements, but a number of leading lawmakers in Albany and Washington did not hear from the governor on the matter.

Donors, some of whom embrace Cuomo as a moderating force in the party, began to worry about his future. And a person close to Lt. Gov. Kathy Hochul described an uptick in outreach to her office from political figures around the state — an unmistakable sign of uncertainty around Cuomo.

At least for now, many Democratic voters appear to see the dynamics concerning the governor differently, a reminder that the political impact of the controversies is fluid and unpredictable. A Quinnipiac University poll out Thursday showed that Democrats overwhelmingly did not believe that he should resign, and half of those Democrats surveyed supported his running for reelection next year.

But if Democratic voters are reserving some judgment on Cuomo, he has faced a staggering backlash from politicians in his party, many of whom have traditionally been reluctant to publicly challenge him — in some cases, for fear of retribution.

Overlaying all of the turmoil is a sense of great uncertainty around whether additional women will raise allegations.

“Any further people coming forward, I would think it would be time for him to resign,” the state Senate majority leader, Andrea Stewart-Cousins, said on Spectrum News’ “Capital Tonight” Thursday.

Indeed, the public outcry and the dearth of vocal defenders illustrate both the complexities of the problems Cuomo faces and how little he has invested in building mutually respectful relationships in politics. As with other New York politicians in times of extreme crisis, it is a dynamic that is haunting him now.

“The governor is in trouble because he’s a very tough guy and there are many people who don’t like him,” said George Arzt, a veteran New York political consultant who has known Cuomo for years. “He doesn’t have that reservoir of friends and good feeling to sort of push back. At this point, you don’t see many surrogates out there, and that’s a problem.”

Asked to point a reporter to surrogates for the governor, spokespeople for Cuomo did not respond.

In interviews over the past week, observers of Cuomo discussed political comparisons to former Gov. Eliot Spitzer, who resigned abruptly after revelations of his involvement with a prostitution ring. In both cases, critics saw the men as domineering personalities who made enemies in political circles — leaving few people willing to go to bat for them when scandal hit.

“Spitzer at one point thought that he could fight it, and that was quickly given up when he realized that his allies were not saying a word,” Arzt recalled.

Certainly, he suggested, Cuomo “has his own inner circle that is still ready to go to war with him” — not to mention a long list of accomplishments in office and, Arzt said, “tremendous skill as a tactician.”

“I do believe if anyone can get out of this, he can,” Arzt said, “if no other shoe drops.”

And as Hank Sheinkopf, another longtime Democratic strategist, put it, “Eliot Spitzer had no friends. Andrew Cuomo has some friends.”

This week, Hazel Dukes, president of the NAACP New York State Conference, said of Cuomo that it was “ridiculous to ask him to resign.” And while few prominent New York politicians have rushed to defend him, many have also held their fire regarding the question of resignation, deferring first to the independent investigation.

For now, Cuomo continues to occupy a prominent space on the national stage. As the chair of the National Governors Association, he kicked off a meeting with President Joe Biden and other governors during the last week of February. Cuomo and Biden have had a strong political alliance in the past, but the two have not otherwise spoken since the harassment allegations broke, a Biden adviser said. The White House has indicated that it supports the independent investigation of the accusations of harassment against the governor.

“When the investigation concludes, Democrats, I believe, will coalesce around doing the right thing,” Jacobs said. “We have to let the chips fall where they may, but I don’t see the value in a rush to judgment. I only see the potential cost.”

In the meantime, Cuomo’s allies have quietly conducted outreach to figures including the Rev. Al Sharpton, the civil rights leader.

“I feel that a woman’s statements have to be taken seriously but that he deserves a full, fair investigation,” Sharpton said. “So I’m not calling, as of yet, for his resignation. But I’m also not attacking the women.”

The question for Cuomo is whether Democratic leaders are willing to wait for that investigation to play out or if other developments force a reassessment of their posture before that happens. There are also many people in New York politics who have accumulated a list of grievances toward Cuomo that span decades. Some of them may relish the chance to break from him if they sense enough weakness — as they did with one of his predecessors.

“I distinctly remember with Spitzer, watching it all go down and saying at the time to myself, if he just had a few more friends who were willing to stand by him, I bet he could get past this,” Krueger said. “But it was all really rapid, and there wasn’t anybody coming forward.”