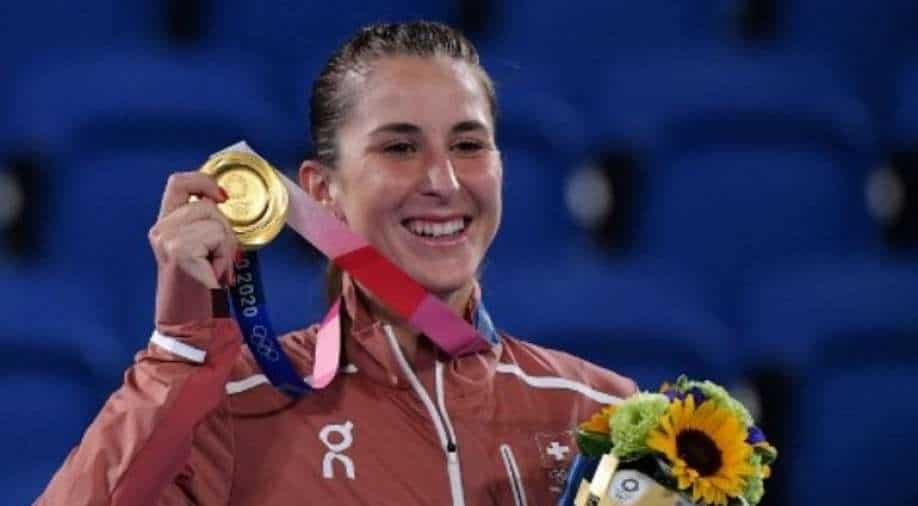 Belinda Bencic has dedicated her gold medal to Swiss great Roger Federer, whose pre-match message inspired her to victory in Tokyo.

The 20-time Grand Slam champion has never won Olympic gold in the singles competition, collecting silver after losing to Andy Murray at London 2012 and bronze in the 2008 doubles event alongside Stan Wawrinka.

Not even Martina Hingis, the Swiss player who Bencic's career was inspired after, claimed an Olympic title. Her best result was silver in women's doubles in 2016 with Timea Bacsinszky.

The 12th-ranked Bencic beat Marketa Vondrousova of the Czech Republic 7-5, 2-6, 6-3 at the Tokyo Games on Saturday for the first major title of her career and she'll also contest the women's doubles gold medal match on Sunday.

On winning Olympic singles gold, something her idols Hingis and Federer failed to do, she said, "I think I accomplished it for them. I think they did so much in their careers. I'm not sure I will ever be able to do what they have done. But maybe I could help them to accomplish this one by giving them this Olympics. So it's both for Martina and for Roger."

Bencic and Swiss partner Viktorija Golubic face the top-seeded Czech team of Barbora Krejcikova and Katerina Siniakova. She was also asked if Federer has been in touch with her.

"Yes, he wrote to me today. He said this was the perfect day to reach my dreams and I was really happy about that. And he was absolutely right. "He is incredible in that way, he really supports all of the Swiss players. He is behind us and it's just incredible the type of support I receive from Roger Federer, so this win is also for him."