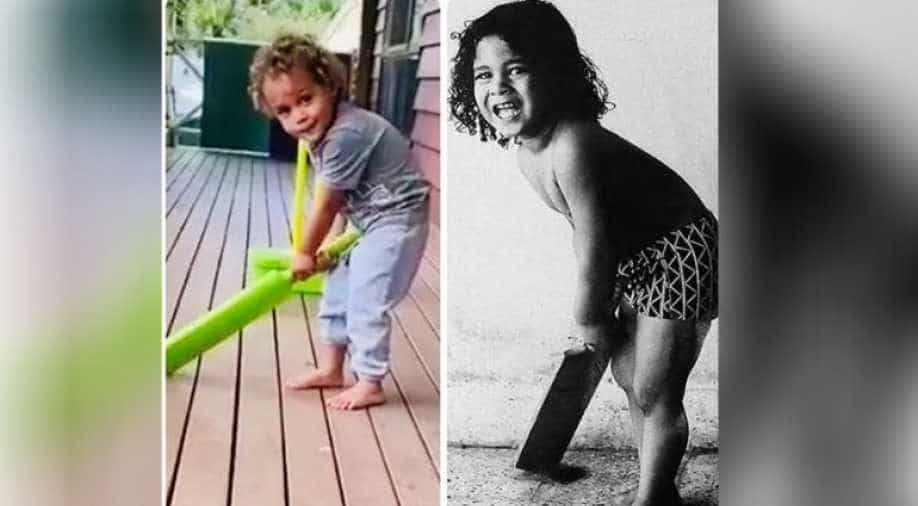 Sachin wrote: "@brianlaraofficial I know of another boy who had a similar grip and didn’t do too badly in international cricket."

West Indies' former batsman Brian Lara posted a video of his son handling a bat and India's batting legend Sachin Tendulkar took a snapshot of that video and compared it to a similar picture from his childhood and posted it on Instagram.

Sachin wrote: "@brianlaraofficial I know of another boy who had a similar grip and didn’t do too badly in international cricket."

@brianlaraofficial I know of another boy who had a similar grip and didn’t do too badly in international cricket. 😋

Later on, Brian Lara reposted the photo and wrote: "I can see that @sachintendulkar and some of the best bowlers in the world felt that sword! Well, I am not interfering then lol. Thanks for the advice. #rightvsleft #legend #mostruns #recordsmen."

Look at the way he grips the bat, that tells me he wants to be a lefthanded batsman. Mummy is giving him some good advice. Look at the attitude when told to switch hands. 😎😂 "Both hands on the bat" 😂 NO Action time swings right misses swings left and makes contact #donedeal #leftiebatsman "Don't you want to play like daddy" NO! 👍 #betterthan That's my boy!

Sachin was moved by Brian's re-post, he replied: "Thanks for the kind words Brian. He is going to be learning from one of the greatest batsmen in the world who also happens to be his dad, and my friend. #leftandright."

World cricket's great batsmen and on-field rivals Sachin Tendulkar and Brian Lara have had a good friendship off the field. They locked horns on several occasions while playing for their respective countries. After retiring from the sport, both of them have spoken highly of each other.

Earlier, Lara called Tendulkar's 241-runs knock against Australia as one of the most disciplined ones. Through an Instagram post, he said: "Can you imagine playing Test cricket at the age of 16 until the next 24 years. That is just unbelievable. Sachin has played some amazing innings throughout his career but none with more discipline and determination like his 241* against Australia at the Sydney Cricket Ground (SCG)."

Football: France's Ousmane Dembele ruled out of Euro 2020 with injury

WTC Final: Despite collapse on Day 3, 'India not out of the game', says Deep Dasgupta

Up to 10,000 fans allowed at Tokyo Olympics events: Organisers