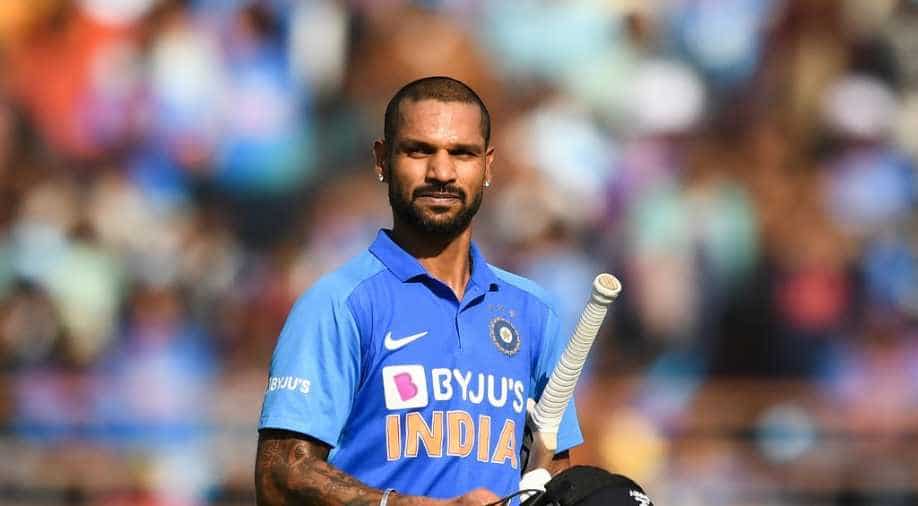 The oldest player in the Indian ODI set-up, there were lot of talks about Dhawan's poor form in domestic cricket but as it has been with the 36-year-old, he was back with a bang in his favourite blue shirt with a top-score of 79 off 84 balls, albeit in a losing cause in the first ODI against South Africa.

Shikhar Dhawan believes that every lean patch in his career has made him "stronger" but it is his clarity of mind and calmness that has enabled him to ride over the rough times.

The oldest player in the Indian ODI set-up, there were lot of talks about Dhawan's poor form in domestic cricket but as it has been with the 36-year-old, he was back with a bang in his favourite blue shirt with a top-score of 79 off 84 balls, albeit in a losing cause in the first ODI against South Africa.

"I don't listen to the media or don't read newspapers or watch news, that way I don't take all that information," Dhawan said when asked how he keeps himself way from negativity.

For him, neither the bad patch has affected him for the first time nor is it going to be the last time but one needs to have the self belief in one's abilities.

"I have full confidence in myself that what my game is and I have clarity on that and I stay quite calm. And this is part of life, this happens in life, everyone's life has ups and downs, so it is nothing new and happening for the first time or for the last time in my career or my life, so it is alright, that only makes me stronger," said Dhawan.

Dhawan came into the series after a poor run of Vijay Hazare Trophy scores --- 0, 12, 14, 18, 12 -- in five List A games. But if one carefully looks at Dhawan's career, just when there have been calls to drop him, he has invariably responded with a big knock like he did in the first ODI, where he looked the best batter in his side.

"These talks (to drop him) always are there and I am used to it and I just know how to give my best and I always make sure that my preparation is quite good and process is good and then I leave it on God.
"...And I know that with my experience and my self-confidence, I'll do good and I am happy that I did well today," the flamboyant opener quipped.

His endeavour is to remain fit and healthy for the last part of his career.
"With my experience I'll keep scoring lots of runs and yeah till the time I keep playing cricket I stay healthy and happy and I score lot of runs," he said knowing well that he is reaching the business end of his career.

Not an easy wicket to play shots in middle overs

Dhawan's assessment of his team's 31-run defeat against South Africa was its struggle to keep the scoreboard ticking in the middle overs as the pitch got slower.

"We had a good start and I feel the wicket was slow, it was offering a bit of turn as well. So, when you are chasing (around) 300 runs, when the middle-order comes to bat, it is not easy to play shots.

"Our wickets fell in a heap and that had an impact on us as a batting unit," Dhawan reasoned.

Dhawan also praised the South African duo of Temba Bavuma (110 off 143) and Rassie van der Dussen (129 not out off 96) for their well crafted hundreds that laid the platform for a convincing win.

Asked what was the turning point of the game, he said, "I feel both the South African batsmen (batters) batted quite well and they took the innings quite deep."

Younger batters need to mould game as per demands

Dhawan believes that handling varied match situations comes with experience and the likes of Rishabh Pant, the two Iyers -- Shreyas and Venkatesh -- will understand better as they play more games.

"This (discussion) we have that play according to the situation and what the situation demands, keep the team ahead and an individual's game is important," he said.

"...But at the same time be practical, how can you mould your game, so that when a partnership is needed, then it is necessary, all those things and I feel these get refined with experience and time," noted the Delhi batter.

The southpaw was again asked how the middle order problems can be rectified, to which he said, "See our thought process as a unit or a team is that we are building our team for the 2023 World Cup, so there are going to be a few hiccups here and there, which is fine and we as a team analyze how we can get better."

Rohit's absence is a factor

Dhawan believes that once regular white ball captain Rohit Sharma is back in the mix, the team will be stronger and the middle-order will also play better cricket.

"Now Rohit (Sharma) isn't there, once he comes back, an experienced player will come in and the middle-order (Rahul will go down) will get stronger. So, the youngsters who are getting a chance, they will gain from this experience. We are looking at bigger picture," he said.