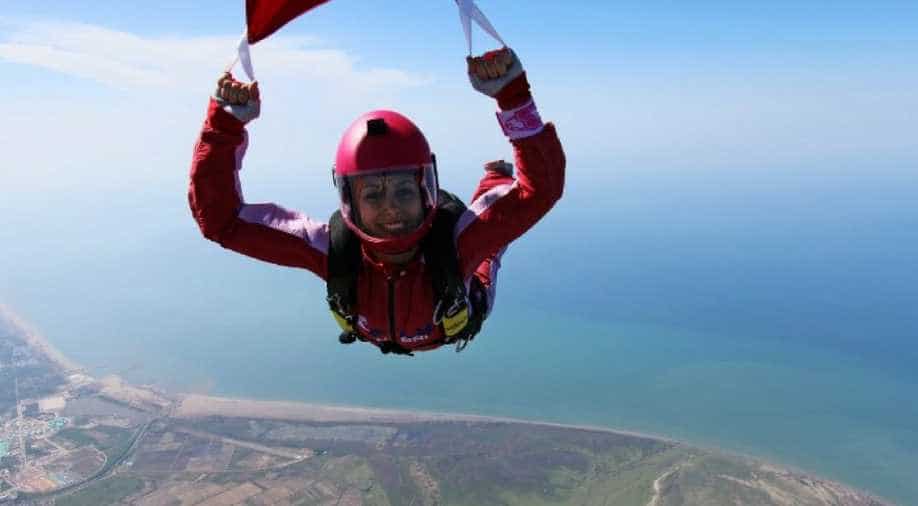 Iranian parachuting enthusiast Bahareh Sassani claims skydiving is "a way to prove that women are just as capable as men." Photograph:( AFP )

For Iranian parachuting enthusiast Bahareh Sassani, skydiving is "a way to prove that women are just as capable as men" -- a small step from a big height for women's equality in her country.

The 35-year-old accountant has been skydiving less than two years but already has more than 220 jumps under her belt.

"I encourage all women to try this experience. It gives you the feeling you can do whatever you want. Women should not be excluded from anything," she said.

Sassani -- one of just a handful of female skydivers in her deeply conservative homeland -- refuses to describe herself as a "feminist".

But her motto is firm "there is no difference between men and women and a woman can do anything she wants and succeed".

That still runs against the grain of Iranian society, where women have had a lower legal status than men since the Islamic revolution of 1979 even if they have battled to stay equal in daily life.

Her favourite pastime is still very much the preserve of men in Iran -- made more complicated by the fact there is no parachuting club so she must do it with the army.

"When they organise jumps, the army invites everyone, including civilians," she explained.

There were a handful of women parachutists in pre-revolutionary Iran: archived images published recently by the ISNA news agency showed the first four female army skydivers from 1965.

But today, women are not permitted to join the army.

The police have an elite unit that does some parachuting practice, but Sassani says she knows only five other qualified women from the civilian population.

Unlike her friends who chose to buy a car, clothes or jewellery with their first pay cheques or savings, Sassani said she opted instead to invest in parachuting, despite the adventurous sport being a male bastion in Iran.

At the start, her motivation for taking up skydiving was to combat a fear of heights, she said. But now she loves the sense of liberation from everyday cares that it gives her, she added.

Male reactions can be rather extreme though, she says.

"Men often avoid women like me, thinking we aren't made for marriage because we are uncontrollable," she said, bursting into laughter.

"But a small number do show an interest in what I'm doing."

It can also generate interest abroad, said Sassani, who has jumped in Russia, Kenya, Thailand and the UAE.

"Even abroad, when I skydive, people are surprised. They think there are a lot of restrictions in Iran, but I explain to them that there are women doing motocross, flying planes and, yes, parachuting," she said.

A recent photo did the rounds in the Iranian media, showing Sassani jumping with an Iranian flag.

"I meet lots of cultures and beliefs abroad, but I'm a patriot and I love doing jumps in Iran more than anything," she adds.