IPL 2021: Twitter hails Kolkata Knight Riders' stunning win over DC as 'one of the best comebacks' 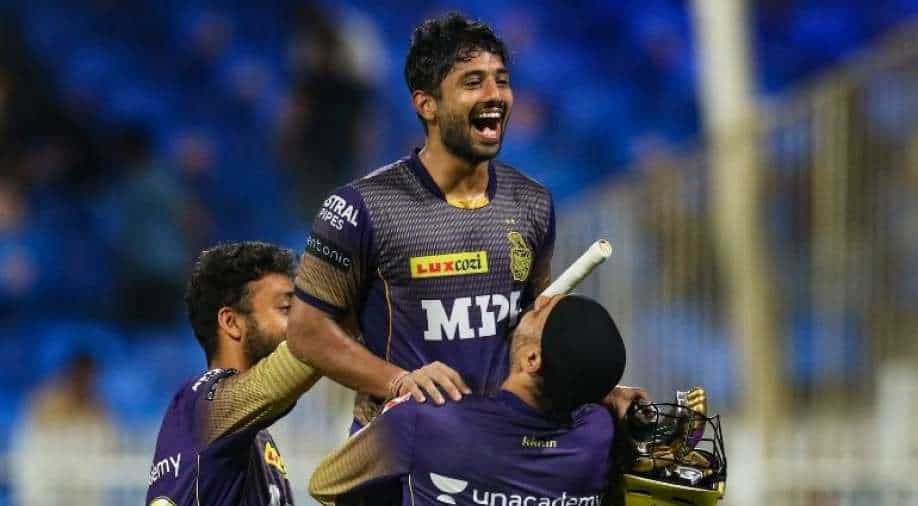 Morgan admitted that the win 'should've been a lot easier' after the good start. 'We are delighted to get over the line. We are in the entertainment business and needed to play some entertaining cricket'

From former Indian cricketer Virender Sehwag to star spinner Kuldeep Yadav, Kolkata Knight Riders (KKR) are on the receiving end of praises after their outstanding performance against Delhi Capitals (DC) on Wednesday (October 13) in the second Qualifier.

Venkatesh Iyer struck a fluent half-century as KKR overcame a late-over scare to reach the final of IPL 2021, where they will face MS Dhoni-led Chennai Super Kings (CSK) on Friday.

After the win, Sehwag took to Twitter and wrote, "That was the most incredible 4 over turnaround. Kolkata almost outdoing Punjab, but Tripathi saving it. Great game."

Set 136 for victory, Kolkata looked to be easing towards victory thanks to fine knocks from openers V Iyer (55) and Shubman Gill (46) before five quick wickets forced a thrilling finish.

With seven needed off the last over, Ravichandran Ashwin removed Shakib Al Hasan and Sunil Narine off successive deliveries but Rahul Tripathi (12 not out) hit the off-spinner over his head for six to guide his side home with a ball to spare.

What a game of cricket. 😅 Unbelievable batting from @ShubmanGill @venky & @tripathirahul52 at the end to get us through the line.
Looking forward for the finals on Friday. 💜
Let's go @kkriders 💪 pic.twitter.com/hPMPqT5xsE

An exciting game of cricket. The nerves towards the end. Whoof! 🙌 Superb work boys. All the hard work paying off @KKRiders 💜💜 pic.twitter.com/e023wqIY8Q

That was the most incredible 4 over turnaround. Kolkata almost outdoing Punjab, but Tripathi saving it. Great game. #DCvsKKR

Rohit Sharma, MS Dhoni, Gautam Gambhir, David Warner, now Eoin Morgan in the final ....Showing the great value of having a top leader. I will repeat, in franchise T20 cricket, a good captain is almost worth two players

Who would of thought?!! See you all Friday. @KKRiders @IPL pic.twitter.com/h9txU3hrgU

Comeback of #KKR is unprecedented ! Gut feelings that they will win a cup now .. Korbo Lorbo Jeetbo re ...#KKRvDC

KKR skipper Eoin Morgan admitted that the win "should've been a lot easier" after the good start. "We are delighted to get over the line. We are in the entertainment business and needed to play some entertaining cricket. Six off two and you would say the odds are for the bowling side. But Tripathi has done it for us so many times." Morgan said.

During the match, DC opener Shikhar Dhawan struggled his way to a 39-ball 36 but couldn't break the shackles. Prithvi Shaw (18) looked good in his brief stay, while comeback man Marcus Stoinis (18) got the start but couldn't capitalise on it.