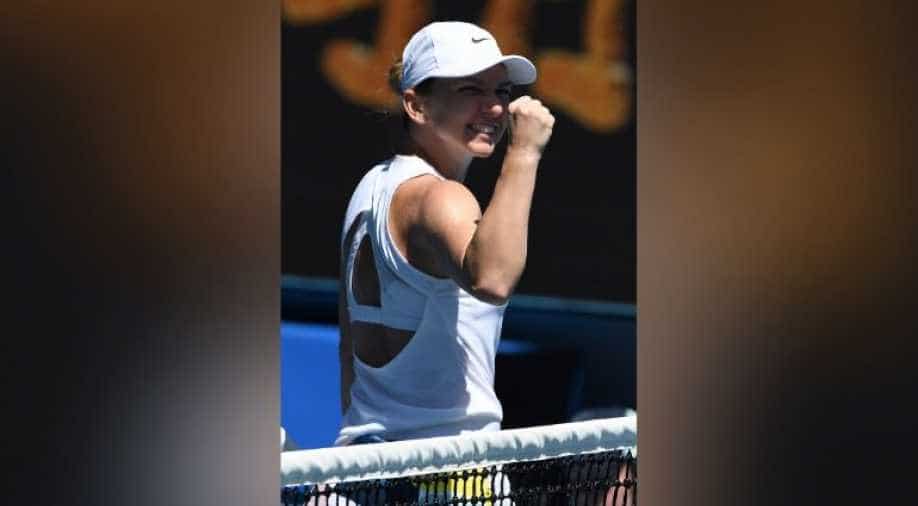 "I felt great today on court. I was feeling my game, I felt strong on my legs," said Halep.

Simona Halep sent out a warning at the Australian Open on Wednesday, powering into the semi-finals in 53 minutes with a 6-1, 6-1 destruction of Estonia's Anett Kontaveit.

The 28-year-old Halep, the only quarter-finalist not to drop a set, is bidding to add the Australian Open title to her 2018 French Open crown and last year's Wimbledon triumph.

"Perfection doesn't exist, but I'm very happy with the way I played."@Simona_Halep, we reckon a 6-1 6-1 quarterfinal win in 53 minutes in which you saved the only break point you faced & won all your net points is pretty close to perfect!#AO2020 | #AusOpen pic.twitter.com/tdAePKPToF

"I felt great today on court. I was feeling my game, I felt strong on my legs," said Halep.

"I know how to play against her so I was just focused on every point I played."

Near Perfect 👏@Simona_Halep remains undefeated against Kontaveit as she dominates 6-1 6-1 in a speedy 53 minutes to reach her second final four in Melbourne.#AO2020 | #AusOpen pic.twitter.com/vyoQgO2IUq

The Romanian lost the 2018 final in Melbourne to Caroline Wozniacki but said: "That match wasn't negative at all. I couldn't finish (win) the match, maybe I was nervous.

"But now I have more experience. That match helped me win the two Grand Slams that I have already, and maybe it will help me get the third one."

Halep wasted no time asserting her authority over 28th seed Kontaveit, who was contesting her first Grand Slam quarter-final.

Halep broke the 24-year-old in the third game of the first set, then again in the fifth game. Spectators at Rod Laver Arena had barely had time to settle into their seats.

The former world number one sealed a one-sided first set in 29 minutes with a rocket of a forehand that the overwhelmed Estonian had no chance of retrieving.

Kontaveit had failed to win a set against Halep in two previous meetings, and this was to be no different.

Halep broke again at the start of the second set and wrapped up a dominant victory in style, sending down an ace.