Fulham sunk by two own goals at Burnley 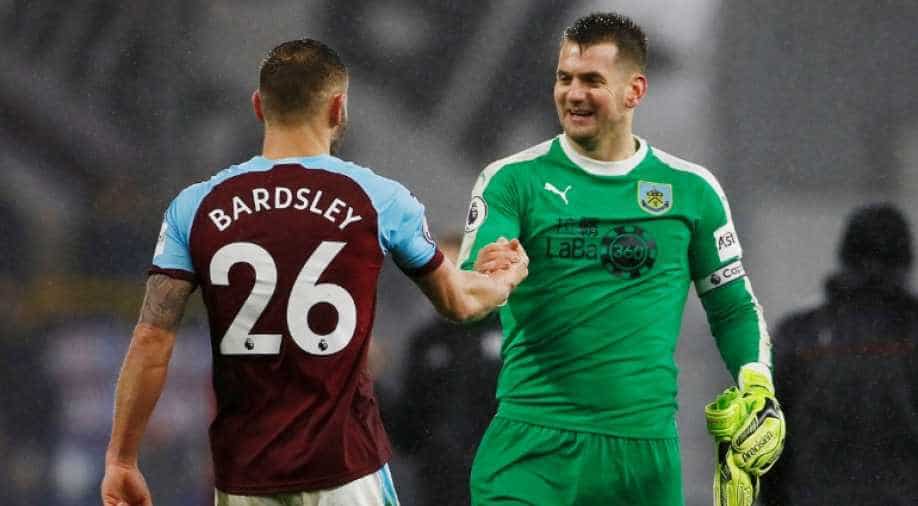 The nine points from three games, including wins over West Ham and Huddersfield, has changed the mood at Turf Moor even if Dyche's side are still far from clear of trouble.

Burnley beat Fulham 2-1 at Turf Moor on Saturday thanks to two own goals to make it three straight league wins for Sean Dyche's side and leave the visitors deep in relegation danger.

The Clarets won without a single shot of their own on target and rode their luck in a typical scrap between two teams fighting against the drop, played in cold, windy and wet conditions.

German international Andre Schurrle put Fulham, without an away win this season, ahead in brilliant fashion in the second minute, bringing down a long ball from Denis Odoi and blasting, first time, past Tom Heaton.

But Burnley got back on level terms in the 20th minute when Jeff Hendrick's low drive was turned into his own net by Fulham defender Joe Bryan.

Three minutes later and Hendrick had forced another own goal -- his drive headed in by Odoi to put the Clarets 2-1 up.

Fulham defender Calum Chambers headed against the bar just before the break -- a sign of what was to come from Claudio Ranieri's side in the second half.

Burnley defender James Tarkowski had to clear a Luciano Vietto drive off the line shortly after the interval and Fulham had most of the pressure after the break without creating many clear-cut chances.

Aside from some moments of quality from teenage winger Dwight McNeil, Burnley relied on hard work and long balls. The three points mean they move up to 15th place, while Fulham are next to bottom on 14 points, five points from safety.

"This period is very strange. We play well, we deserve minimum a draw," said Ranieri.

"The second half we play much better, move the ball quickly. They shoot at goal two or three times and one time they save on the line. These episodes change the music," added the Italian.

"There are good moments and bad moments. We never give up, we continue to believe that at the end we will be safe."

Dyche conceded his side had been lucky but felt they were due some good fortune.

"We have had a bit of luck today with the own goals but we haven't had much this season," he said.

The nine points from three games, including wins over West Ham and Huddersfield, has changed the mood at Turf Moor even if Dyche's side are still far from clear of trouble.

"It brings a feeling. There are no guarantees but it is a big shift for us. There is still more work to be done. Every game is important in the Premier League, no matter who you are playing. Usually you have to play on right until the last game," he said.