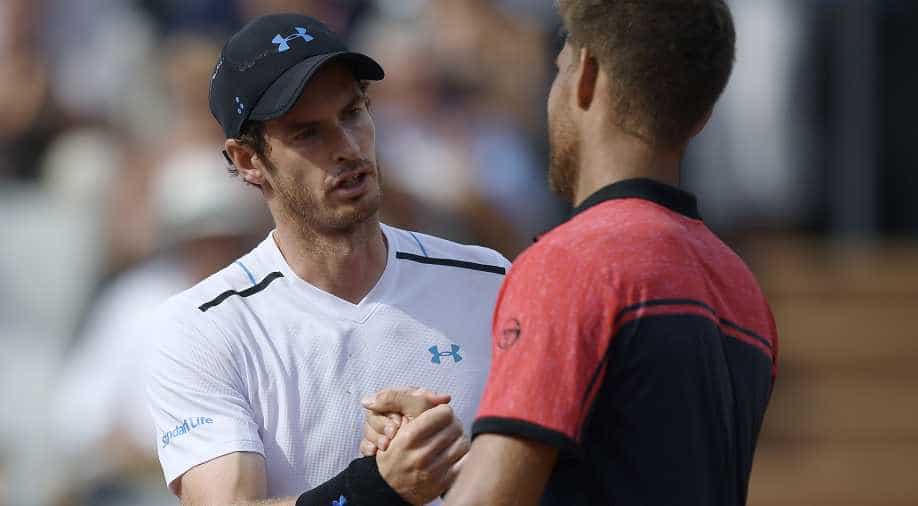 Andy Murray had to dig deep to beat Martin Klizan in the second round. Photograph:( AFP )

World number one Andy Murray set up a French Open blockbuster against Juan Martin del Potro on Thursday, the latest chapter in what has developed into an epic rivalry.

Del Potro, playing in Paris for the first time in five years, went through to the last 32 after Nicolas Almagro retired in tears with a knee injury.

The giant Argentine was immediately hailed for his sportsmanship when he embraced the sobbing, stricken Spaniard.

"I expected a tough match. Martin goes for his shots, he can hit winners with that forehand from anywhere on the court," said Murray.

The Scot beat Del Potro in a marathon Olympic final in 2016 before Del Potro, now 30 in the world, gained his revenge with a come-from-behind win in five sets in the Davis Cup semi-final.

"It will be very tough. Juan Martin is playing a lot better than his ranking," said Murray as he looked ahead to Saturday's clash.

Del Potro, no stranger to injury after a career-long battle with wrist problems, made the third round after Spanish opponent Almagro quit in tears during the third set with a left knee injury.

In a moving conclusion on Court Two, Del Potro sat next to a sobbing Almagro, offering him water while trying to to console the heartbroken 31-year-old.

Del Potro had also gone to the Spaniard's aid when he had collapsed at the back of the court, weeping, just moments earlier.

"I tried to find good words for him at that moment. I say to him, try to be calm. Try to think about his family, his baby," said Del Potro.

"Sometimes the heart is first more than the tennis match."

Del Potro, 28, had taken the first set 6-3 before Almagro claimed the next by the same score.

They were locked at 1-1 in the third when Almagro quit.

Del Potro also suffered an injury scare himself when he pulled up, holding his left groin in the second set.

Wawrinka will face Italy's Fabio Fognini for a place in the fourth round.

Chung, the 21-year-old world number 67, followed up his first round win over US 27th seed Sam Querrey with a 6-1, 7-5, 6-1 victory against Denis Istomin of Uzbekistan.

Anderson, ranked at 56 in the world, made the most of the 18th-seeded Australian's 42 unforced errors to progress to the third round where he will face Britain's Kyle Edmund.

Czech second seed Karolina Pliskova and third-seeded Simona Halep of Romania, both firm women's title favourites after the first round exit of world number one Angelique Kerber, look for places in the last 32.

Pliskova has never got beyond the second round in six previous attempts.

Halep, the 2014 runner-up, faces German world number 102 Tatjana Maria who is bidding to make the third round for the first time.

Fifth seed Elina Svitolina, a quarter-finalist in 2015 and recent Rome champion, made the third round by beating Bulgaria's Tsvetana Pironkova 3-6, 6-3, 6-2.