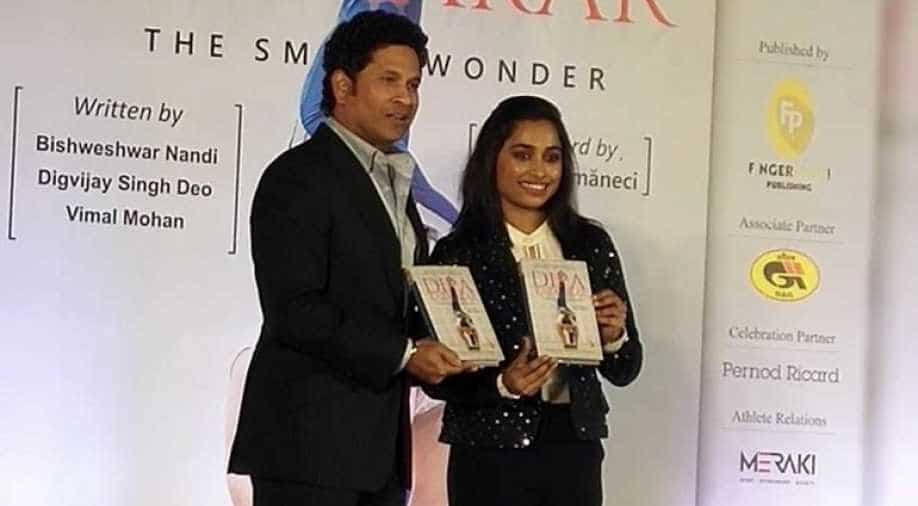 Speaking about her future plans at the event, Karmakar said she was preparing for the 2020 Tokyo Olympics qualification.

The book, which comes with inputs from her coach Bishweshwar Nandi, chronicles the life of Karmakar from Agartala to becoming a world-famous gymnast, who finished fourth in the finals of the vault event at the Rio Olympics back in 2016.

Praising the Indian gymnast, Sachin said that she has 'not only left an impression but also motivated thousands of youngsters' to go out and do something special for our country.

The book has been co-authored by sports journalists Digvijay Singh Deo and Vimal Mohan among the other contributors.

Speaking about her future plans at the event, Karmakar said she was preparing for the 2020 Tokyo Olympics qualification.

"I will be competing in Olympic qualification event in March. Now the criteria for getting qualification has changed drastically. This criteria is very tough for the countries like us, who are not developed much in gymnastics. But, I am preparing and trying at my best (to get that qualification)."

In 2018, the 25-year-old from Tripura became the first Indian gymnast to win a gold medal at a global event, when she finished first in the vault event of the FIG Artistic Gymnastics World Challenge Cup at Mersin, Turkey.

Karmakar is one of the only five women who have successfully landed the Produnova, which is regarded as the most difficult vault currently performed in women's gymnastics.