Ten years after war ended, Sri Lankan Tamils may never get back land 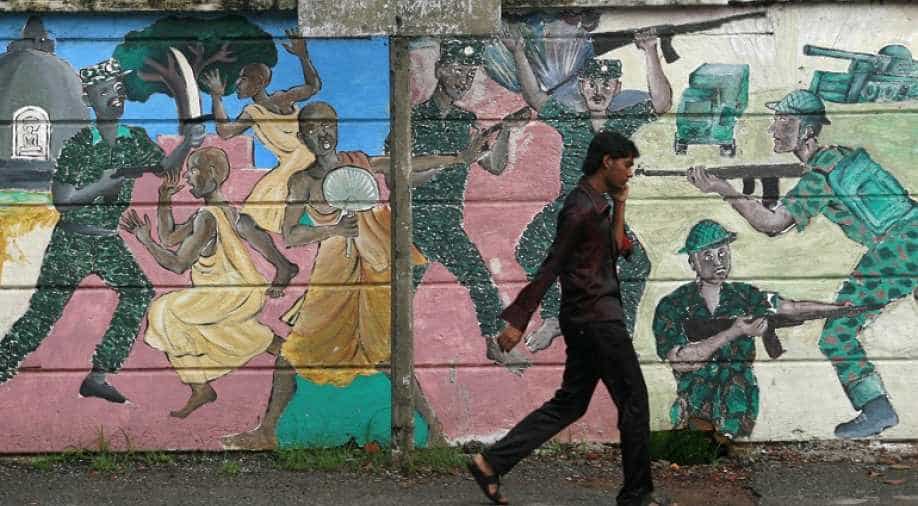 A man walks past a mural depicting fighting during the war in Colombo April 27, 2011. Photograph:( Reuters )

Thousands of people were killed in the war, which ended in May 2009 after nearly three decades, and many of those who fled or were forced from their homes in the north and east had their properties seized, according to human rights groups.

Thousands of people were killed in the war, which ended in May 2009 after nearly three decades, and many of those who fled or were forced from their homes in the north and east had their properties seized, according to human rights groups.

Government authorities said about 80 per cent of confiscated land had been handed back. The remainder, mostly held by the military, may never be returned, said Dhammika Herath, a post-conflict expert at the University of Peradeniya in Sri Lanka.

"It is unrealistic to expect that these lands would ever be released because the government would continue to maintain permanent military bases," he said.

"A more pragmatic approach would be the payment of replacement costs to the owners at current market prices. People are dependent on agriculture, and the lack of access to land has translated into lack of employment and poverty."

Land access, use and ownership are central concerns for post-conflict peacebuilding, especially in agriculture-dependent areas, according to the United Nations' refugee agency (UNHCR).

With people returning after long absences - as in Sri Lanka - there can be difficulties with proving ownership, military control, occupation by others, and re-zoning, said Menique Amarasinghe, head of UNHCR's Sri Lanka office.

"Access to land remains a problem for many," she said.

"If the military cannot release all of the land, then there is a need to clearly identify which lands will not be released, and provide just compensation."

Sri Lanka President Maithripala Sirisena had vowed to return all land held in the northern and eastern provinces by December 31, 2018 but that deadline was not met, according to human rights groups.

Nearly 30,000 acres (12,140 hectares) of private land were still being held as of March 31, according to government officials.

Sumith Atapattu, a spokesman for the Sri Lankan army, said the land is being retained for "security purposes".

"We are open to seeing if compensation or some alternate arrangement can be made," he said.

"This is not a priority now. The army can say they need to hold on to the high-security zones for some more time," he said.

"People lost their homes, their livelihoods, and have not received compensation or reparations. This will prolong their suffering," he told.

Some have taken matters into their own hands.

Earlier this year, more than 100 Sri Lankan Tamil families in the northeastern town of Mullaitivu said they would occupy their former homes forcefully if their land was not returned, following the lead of others who did so last year.