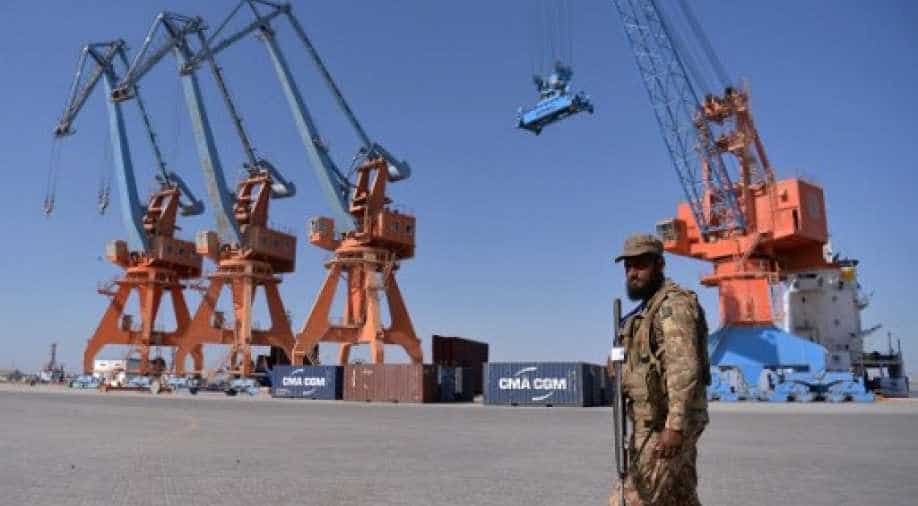 A Pakistani Army personnel looks on during the opening of a trade project in Gwadar port, some 700 kms west of Karachi. The CPEC is expected to connect China to the Gulf nations, and boost Pakistan's infrastructure. Photograph:( AFP )

Indian Prime Minister Narendra Modi on Tuesday said during his speech at the Raisin Dialogue that it was imperative that all countries should have "respect for sovereignty" as it was "important for regional connectivity to improve", Pakistan daily Dawn reported.

Many felt that the Indian government indirectly took a swipe at the ambitious CPEC project, which aims to upgrade and expand Pakistan's infrastructure and provide Beijing direct access route to Gulf countries for energy supply.

The CPEC cuts across Pakistan-administered Kashmir, also called Azad Kashmir, a region that is disputed by India to be theirs.

China, however, maintains that the mammoth economic project was to facilitate trade and "regional peace and development".

“Regarding CPEC, this is a project that is devised for long-term development and cooperation in various fields," said Hua Chunying, spokesperson of China's foreign ministry, in defence to Modi's statement.

The next day, New Delhi stuck to the same line, this time directly referring to CPEC as violating India's territorial sovereignty. "CPEC passes through a territory that we see as our territory. Surely people will understand what Indian reaction is. There needs to be some reflection and I am sorry to say that we have not seen signs of that,” Dawn quoted Indian foreign secretary S Jaishankar as saying on the second day of Raisina Dialogue.

New Delhi has voiced their stout opposition to the economic corridor because the project passes through Azad Kashmir. Although China has welcomed India to join the CPEC to boost regional trade, New Delhi is of the opinion that the project is a sneaky attempt to help Pakistan's quest for Kashmir.

The bickering between India and China began after New Delhi's attempt to enter the Nuclear Suppliers Group (NSG) was blocked by Beijing. The diplomatic rift further deepened when China thwarted India's bid to get the United Nations to label Jaish-e-Mohammed chief Masood Azhar as a global terrorist. India believes Azhar to have orchestrated the 2001 Indian Parliament attack.