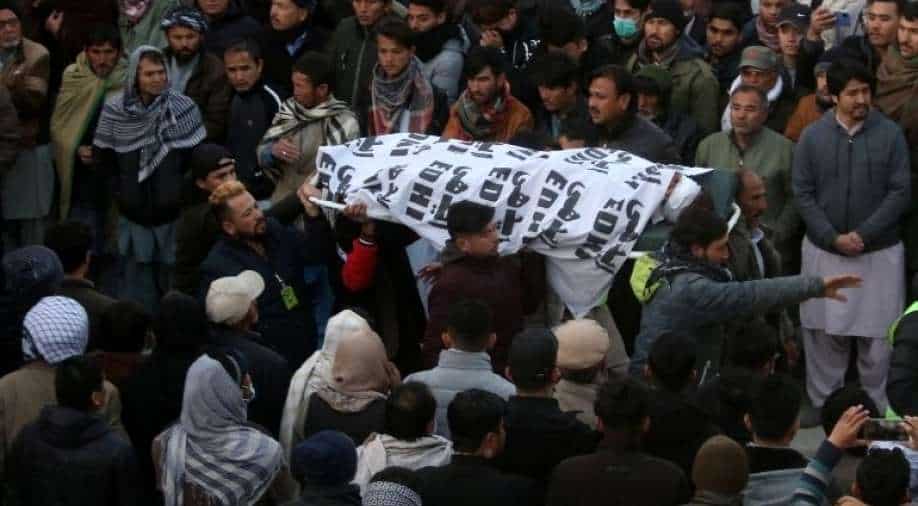 People and family members carry a body of their relative, who was a coal miner and got killed along with other coworkers from Pakistan's minority Shi'ite Hazara community by unidentified persons in Mach area of Bolan district, in Quetta, Pakistan Photograph:( Reuters )

Pakistani Hazara families of the victims, who were killed by unidentified men at the Mach coalfield, refused to bury their loved ones and continued their sit-in on the western bypass of Balochistan with the victims` bodies demanding the Balochistan government to either arrest the killers or resign.

"No male member is alive in our family who could bury my elder brother and four other relatives," Dawn quoted Masooma Yaqoob Ali, a student of the third year who lost five members of her family in the tragedy.

Among her five siblings, her brother was the only son of her parents and the sole breadwinner of the family, Yaqoob Ali added.

"We have staged a sit-in for the protection of the Hazara people who have been facing such killings since long and have become fed up with the situation," Dawn quoted Syed Agha Raza, Balochistan Majlis Wahdat-i-Muslimeen (MWM) President.

The bodies would not be buried until demands of the community are not fulfilled, Agha Raza said. Demanding the government`s resignation, Agha Raza said the Balochistan government had repeatedly failed to protect the people of the Hazara community.

"We will continue the sit-in till the resignation of the provincial government," Agha Raza said, adding that a judicial commission comprising retired and sitting judges of the apex court should be appointed for conducting a judicial inquiry into the incident.

Islamic State had claimed responsibility for an attack on Sunday that killed 11 miners from Pakistan’s minority Shi’ite Hazaras in Baluchistan province.

The attack took place early on Sunday morning in the Mach area of Bolan district around 100 kms southeast of Baluchistan's capital Quetta, killing the miners who were in a shared residential room near the coal mine where they worked, officials said.

As per the Geo News, police said the armed men took the coal miners to nearby mountains and opened fire. Eleven were confirmed dead by police while others injured were reported to be in critical condition.