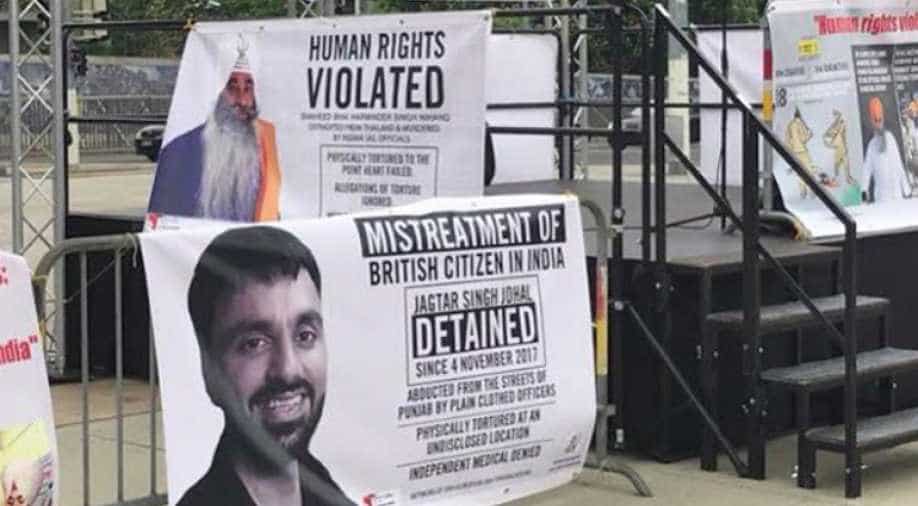 A group of Sikh hardliners held a protest outside the United Nations office in Geneva to demand the release of Sikh militants arrested in India.

The protest was held at the behest of Pakistan and was planned by the Sikh Federation (UK), an organization that acts as a sympathizer of a separatist movement in India.

These Sikhs who migrated to UK and other parts of Europe decades ago, have a history of being involved in some or the other terrorist activity in India.

The protesters put up banners near the Broken Chair to show their support to terrorists, including Harminder Singh Mintoo, the chief of Khalistan Liberation Force (KLF), who recently died of heart attack in the Nabha Jail in Punjab.

As per the police files, Mintoo had the backing of Pakistan's Inter-Services Intelligence (ISI) agency, which had been providing him with logistics to carry out terror activities in Punjab.

He had over ten terrorism-related cases in Punjab and other places against his name.

Sikh protesters in Geneva also demanded the release of Jagtar Singh Johal, a British Sikh activist, who was arrested last year for his alleged connection with a spate of targeted killings of Hindu leaders, including Jagdish Gangneja in 2016, Ravinder Gosain in October 2017 and pastor Sultan Masih in July 2017.

Police are of the view that Johal is behind these murders and was also providing funds and arranging arms for the Khalistan Liberation Force.

The posters outside the UN also include the name of Jagtar Singh Tara, the mastermind behind the assassination of former Punjab chief minister Beant Singh, who is now in police custody.

Two other accused -- Gurpreet Singh Gurdaspur and Gurdev Singh Jajja - have been deported from Thailand on various charges in the recent past.

Pakistan is making an all-out effort to revive the Khalistan Movement in Punjab by providing logistic and financial support to separatists settled in UK, Canada, the United States and Europe.