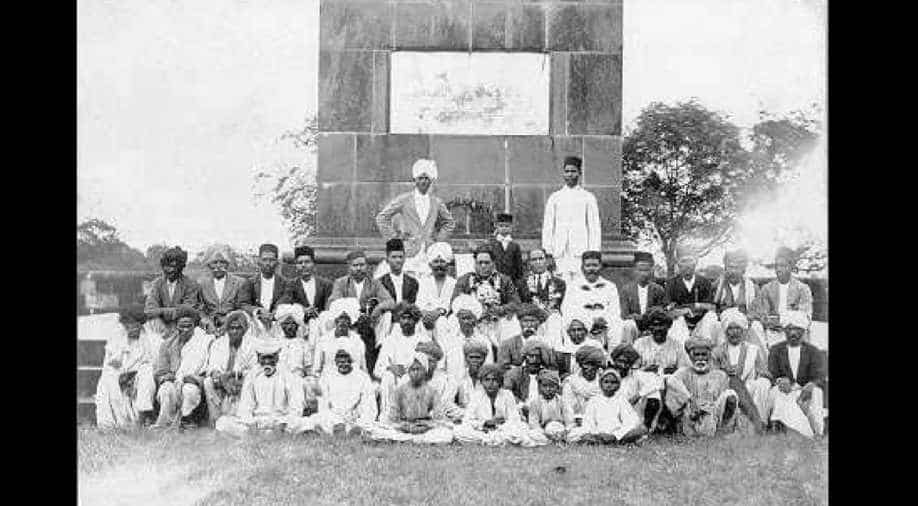 Dr. Babasaheb Ambedkar and his followers at 'Vijaystambha', Bhima-Koregaon. Photograph:( Others )

Dalit history by Dalit historians for Dalit consumers has always had a different perspective. Celebrating the victory of British-led Mahar Regiment against the Peshwas is not new but violence meted out to the Dalit on this occasion was first in the recent past. The violence in itself was a telling reminder of the fact that, in this country, the Dalits have an alternate perspective of historical issues and its engagement with Sanatan Dharma.

There is nothing wrong in Dalits celebrating the victory as Peshwai, like many other medieval institutions, was casteist.

The Dalits continue to be orphans in the Hindu pantheon. They are needed to gain numbers in electoral politics but are not accorded social, political and cultural space in our society. Seven decades into post-colonial India, the Dalits still don’t have an intellectual or political say in what they consider to be the history of their own lived past.

Even to the 'Father of the Nation', matters concerning the Dalit community was not about the Dalits in the final analysis; it always had to be in a subsidiary position with the main concern being the integrity of the Hindu community at large. This mindset was amply evident in the conclusion of the Poona Pact.

Even now, Dalit issues get related to questions of conversion, purity, pollution and, lately, anti-nationalism. Consequently, political discrimination and violence does not remain limited to political space. Dalits continue to witness violence which manifests itself in the form of rape and public humiliation.

The point is that, with Constitution, the rights of Dalits have been enshrined but its accommodation at the level of the leadership and sacred has not taken place. After Babu Jagjivan Ram, there has been no national Dalit national leader in post-independent India. Ambedkar, despite being the 'Father of the Constitution' could not rally Dalits as a political constituency after independence. The community had already electorally invested itself with Gandhinian vision, and voted for the Congress party.

A disillusioned Ambedkar converted to Buddhism. His disappointment was more than one; not only have the Dalits failed to emerge as a political constituency, the moral landscape also remained unaltered. Ambedkar died a bitter man.

The violence in Maharashtra, specifically, has less to do with Hinduism and more to do with Hindutva. Shivaji, a fantastic historical figure, has been appropriated by the nationalistic discourse. So, in the process, he has been situated beyond criticism. The evaluation makes Shivaji a human being which ultimately deconstructs the macho nationalistic discourse because it thrives on fantasy. It is this fantasy which denies Dalits their right to breathe and live a different history.

The violence by the dominant caste in this context should not be surprising. The dominant castes have been agitating throughout India on a number of issues over the past 10 years. Two things have happened simultaneously. Whether it is Patel in Gujarat or Jats in UP or Maratha in Maharashtra, all of them want jobs. The dominant castes have run their course in Indian contemporary history. This is the bitter truth. When India became independent, they were not well represented and still saw the world from the angle of socialist politics which was being led by OBC leaders who championed the agrarian cause.

Within 25 years after independence, not only the dominant castes came to dominate the assemblies but also ended up controlling the land. India’s Prime Minister Charan Singh heralded this shift. Despite being a Jat, he was far more focused building a broader alliance of backward leaders. From Laloo to Nitish, all started their careers under him.

Today, the land is not giving money and the communities are not invested fully in other economic activities. On top of it, everyone cannot get reservation. Lastly, they have been Sanskritised and feel more at home with upper castes than Dalits under whose name the biggest of OBC politicians have done socialist politics in India.

It is this tectonic shift which is visible through this violence. In desperation, it latches on to pride and past. It does three things: it discredits them; it tells us that how far dominant castes are removed from their point of political origin. The dominant caste movement, which was socialist and more agrarian in outlook under Charan Singh, today has become completely castist. The rest have been incorporated by Hindutva.