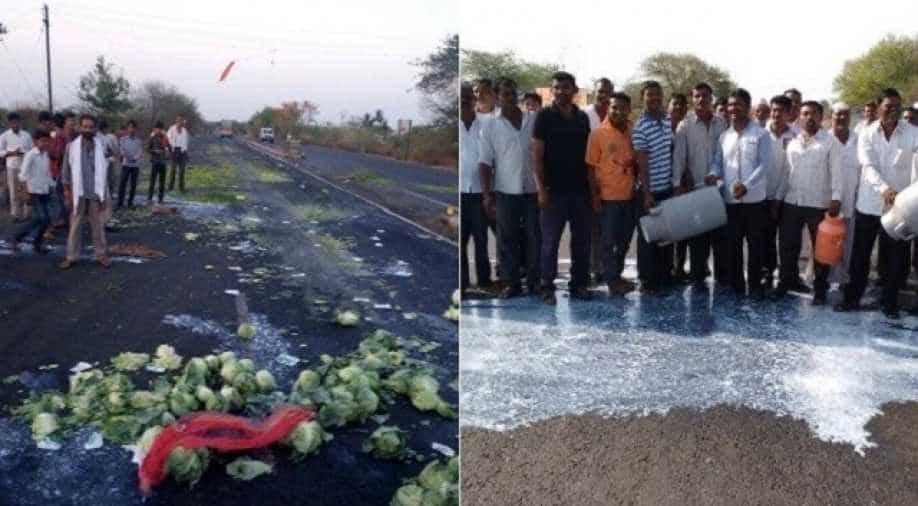 The list of demands include crop loan waiver, pay support price more than one and half times of the production cost, provide an interest free loan and introduce pension scheme for farmers. In photo: The agitation in Maharashtra. Photograph:( DNA )

The farmers' strike in western India's Maharashtra turned violent on Thursday with protesters damaging vehicles and stopping supply of vegetables, milk, and other farm produce to Mumbai, India's financial capital, and other major cities.

The police had to resort to baton charge and firing teargas shells to disperse the unruly mob.

The violence, however, was mostly limited to the prosperous districts of western Maharashtra. The farmers have called for an indefinite strike and refused to roll back their protest unless the state government accedes to their demands.

This is the first time since 1933 that farmers in the state have gone on a strike. The 1933 strike that sparked off from the arable Konkan region of the state continued for more than a decade.

The farmer's movement operating under a joint body, Kisan Kranti Morcha, is demanding 100 per cent loan waiver for all farmers, higher government rates for produce like wheat, sugarcane, vegetables and milk, implementation of the Swaminathan Committee recommendations, a pension scheme for farmers, 100 per cent subsidy for irrigation tools and Rs 50 rate for milk.

The state government on its part does not seem equipped to meet the demands. A complete loan waiver for all farmers will cost the Maharashtra treasury Rupees 305 billion (USD 4.73 billion). The demand comes on the heels of the USD 5.6 billion farming loan waiver for the northern state of Uttar Pradesh as promised by the ruling Bharatiya Janata Party in its state poll manifesto.

Maharashtra chief minister (CM) Devendra Fadnavis reportedly assured the farmers that he will try to work out a formula for waiving loans, but added that it will take some time.

"We had a sit-in protest by farmers from neighbouring districts on May 28 when state minister Sadabhau Khot took some of our representatives to meet the CM. He told us it will take two months to figure out how much loan can actually be waived. The farmers rejected this since the state has been reeling under drought past few years," Avinash Chavan, who is a doctor as well as a farmer from Puntamba village, 15 km from the temple town of Shirdi, told WION

The initial idea of a "farmers' strike" was arrived upon in Puntamba , says Chavan.

"The Minimum Support Price government has fixed for acquiring agricultural produce is too low. Farmers in my village, Puntamba (15 km from the famous pilgrimage of Shirdi), decided to go on a strike. If everybody else can go on a strike for better wages, so can farmers," added Chavan.

Chavan said the decision to go on a strike was taken in a Gram Sabha (village body) meeting held on April 1. In the initial stage, some 50 villages joined in. "By May 1, many other villages joined in the protest. Now the strike is on all over Maharashtra," he added.

News agency Reuters reported that trucks carrying vegetables and milk tankers were vandalised for ignoring the strike call. Incidents of violence were reported from Kopargaon in Ahmednagar district, Satara and Kolhapur. However, this was hardly an exception as Reuters reported. Violence was also reported from Nashik district.

However, some others say this is an attempt by prosperous farmers to piggyback on the poor and get some freebies from the government.

"The farmers who really need loan waiver in Maharashtra are actually a very small number. Those small farmers who still depend on rain for irrigation don’t really get loans from government banks or any other private lending body. Some rich farmers from western Maharashtra are driving this movement. Three of them are from Puntamba. One of them withdrew from the movement after the meeting with the CM since he foresaw violence. This protest is no longer under the control of the original organisers," Madhav Ojha, a Marathi journalist based in Puntamba told WION.