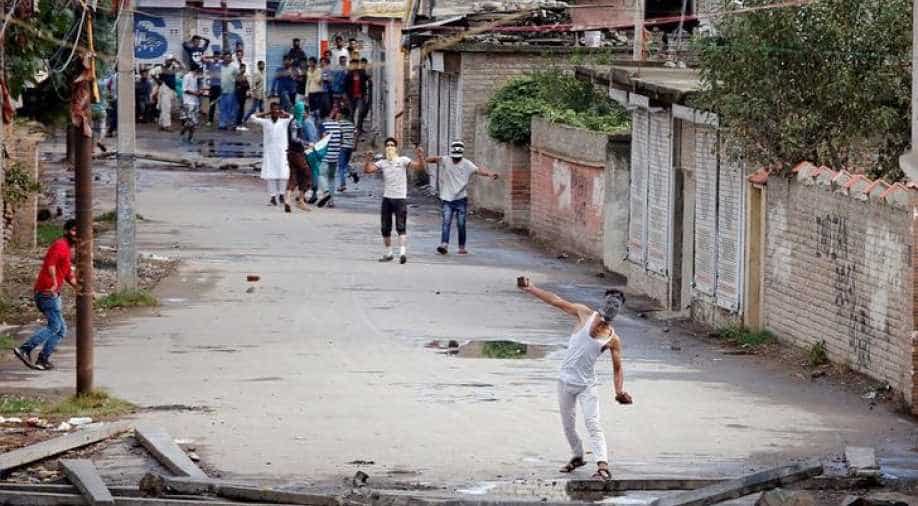 The lockdown in the mainly Muslim region crippled life on the first day of the Muslim Ramadan festival?after widespread violence on Saturday ||Chairman of the separatist Jammu Kashmir Liberation Front (JKLF) Yasin Malik was arrested from his residence in Srinagar

The lockdown in the mainly Muslim region crippled life on the first day of the Muslim Ramadan festival after widespread violence on Saturday over the killing of Sabzar Bhat.

Government forces in riot gear erected barricades in the main city, Srinagar, and other towns in southern Kashmir to prevent people from reaching Sabzar Bhatt's funeral.

But thousands of mourners defied the security curbs Sunday to attended the burial of the rebel commander in his hometown amid anti-India and pro-Independence slogans.

Chairman of the separatist Jammu Kashmir Liberation Front (JKLF) Yasin Malik was arrested from his residence in Srinagar, police said. He had visited the residences of the slain Hizbul Mujahideen militants on Saturday.

Yasin Malik along with chairmen of both factions of Hurriyat Conference, Syed Ali Shah Geelani and Mirwaiz Umar Farooq, have called for a two-day shutdown in the Valley to protest the killing of the two militants and the use of "brute force" against the protestors.

In Srinagar, the restrictions have been imposed in seven police station areas, officials said. However, the district administration has said that the admit cards of students appearing in competitive examinations today would be treated as curfew passes, while the staff posted as invigilators can use their identity cards as curfew passes.

The district administration has also ordered closure of all colleges and higher secondary schools in Srinagar tomorrow.

Restrictions have also been imposed in Anantnag, Pulwama and Shopian districts in south Kashmir and in the township of Sopore in north Kashmir, officials said.

They said restrictions on movement of people under Section 144 CrPc have been imposed in the districts of Budgam and Ganderbal in central Kashmir to maintain law and order.

Elsewhere in the valley, normal life was hit due to strike called by separatist groups.

A civilian was killed and at least 30 persons were injured in violent clashes between protestors and security forces in various parts of the valley on Saturday following the killing of the two Hizbul Mujahideen militants.

Sabzar Bhat was buried this morning at a graveyard in Ratsuna area of Tral where hundreds of people had gathered.

The separatists have called for a two-day shutdown to protest the killing of the two militants.

The authorities have suspended mobile Internet services in the valley, while the outgoing call facility on prepaid numbers has also been snapped as a precautionary measure.