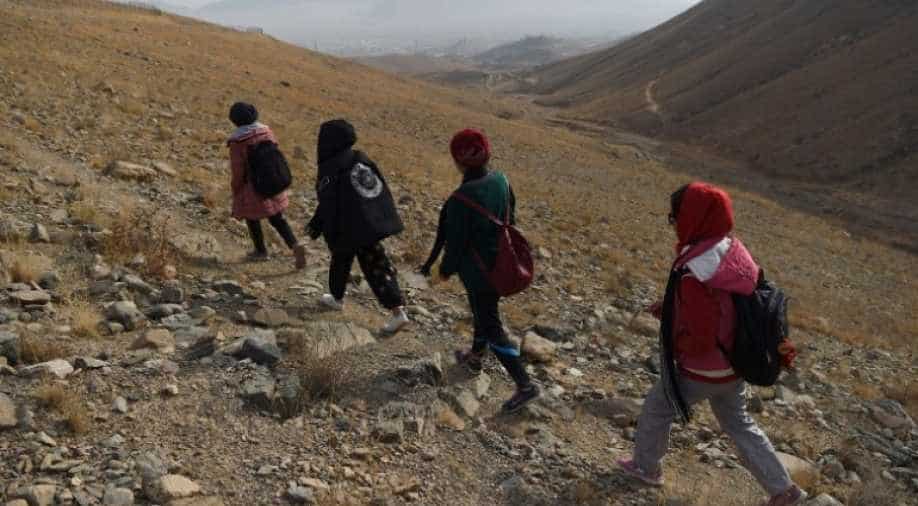 Afghan members of the all-female Free to Run group hike during a training session at the Haje Nabi hilltop on the outskirts of Kabul. Photograph:( AFP )

The all-female Free to Run group hits the city's trails and parks several times a week, braving disapproving looks, verbal abuse and even physical violence to enjoy the rare pleasure of exercising outdoors.

At the crack of dawn in Kabul, dozens of girls and women bounce along a path leading up a barren, rocky mountain on the edge of the Afghan capital, relishing every step of freedom.

The all-female Free to Run group hits the city's trails and parks several times a week, braving disapproving looks, verbal abuse and even physical violence to enjoy the rare pleasure of exercising outdoors.

"When I run, I feel free," says Zahra, 26, whose family name, like that of other female runners interviewed by AFP, has not been used for security reasons.

"I like to run because it motivates me, it gives me a meaning for living."

But it is not easy.

Running in public is something many in ultra-conservative Afghanistan consider shameful for women, who are largely treated like second-class citizens in the patriarchal Muslim-majority society.

It is not unusual for people to stare and hurl insults, says Zahra, who began running a year ago and has already completed two marathons and a half marathon.

"I just laugh at them," she says dismissively.

The marathons take place in safer cities, such as Bamiyan or Mazar-i-Sharif.

For those in war-torn Kabul, where bombs and suicide attacks are frequent, training sessions start at daybreak even through the colder months when temperatures fall below zero and the air thickens with smoke from wood and coal stoves.

Minivans, whose male drivers double as chaperones for the team, collect the girls and women from their homes and drive them to relatively safe running spots.

As the sun peeks over the mountains that surround Kabul, the runners -- wearing tracksuits and headscarves or stretchy bandanas over their hair begin their workout with the men in tow.

Running at their own pace, the girls and women smile and giggle even as their noses run and lungs burn from Kabul's cold, dry and dusty air.

"I feel good when I'm running," says Marmar, 17, who has won three races and finished second twice in the two years she has been competing.

"My family wants me to be a professional (runner). I am proud of myself. So is my family.

'It changed my life'

Free to Run started in 2014, the brainchild of Canadian human rights lawyer and ultrarunner Stephanie Case.

The non-profit organisation aims to empower girls and women in conflict zones through sports like running, hiking, skiing, cycling and kayaking.

So far it has more than 380 members in Afghanistan.

Recruiting girls and women to the team is hard.

While the early-morning starts may deter some, the biggest challenge is getting permission from families, says Kubra, Free to Run's country programme manager.

"Families are worried about the security situation and won't let their girls join the team," she explains.

And many think it is not appropriate for girls to run, "especially in an open place".

For that reason, many of the runners are from the Hazara ethnic group, which is widely considered to be the most open and progressive in Afghanistan.

"I feel powerful when I run," says Jamila, 18, whose family is "open-minded" and encourages her to exercise.

"Running gives me a good feeling, I forget all my stress."

Around one-third of the team are serious runners, training for marathons and ultra-marathons in Afghanistan and abroad, including Mongolia and Sri Lanka.

Others turn up to training sessions when they can, appearing to enjoy catching up with their friends as much as the physical exercise.

As well as building fitness, Kubra says running has helped the girls and women manage anxiety and develop self-confidence.

On a recent hike in the mountains, they cheerfully walked or ran as they listened to music, sang, chatted and took selfies.

"It changed my life," says Fatima, 26, who began running seven months ago after sensing "something was missing in my life".

"I feel healthy," she says.

"I want to encourage (other girls) to run. This is the easiest sport just run and feel free."