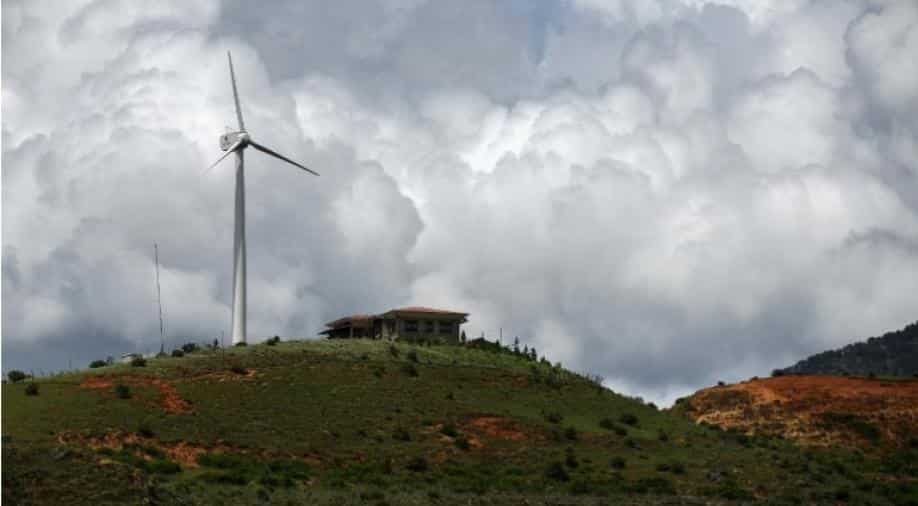 One of Bhutan's first wind turbines are pictured in Rubesa village in Wangdue Phodrang. Photograph:( AFP )

The mountainous state Bhutan absorbs three times more CO2 than it emits, thanks mainly to the lush forests covering 72 per cent of its land.

The gentle whirring of the wind turbine speaks volumes of Bhutan's record as the world's only carbon negative country, but major challenges stand in the way of the Himalayan kingdom's decision to follow a green path over rampant economic expansion.

The mountainous state, holding only its third election on October 18, absorbs three times more CO2 than it emits, thanks mainly to the lush forests covering 72 per cent of its land.

Famed as the "last Shangri-La" for using happiness as a measure of success, Switzerland-sized Bhutan has been careful to keep its environment pristine, often by sacrificing profits.

The nation of 800,000 has restricted tourist numbers with a daily fee of $250 per visitor in high season, helping keep at bay the kind of boom that has ravaged other scenic hotspots.

In May, Bhutan opted out of an India-backed regional road connectivity project mainly over concerns that trucks coming in from other countries will pollute its air.

The constitution stipulates that at least 60 per cent of Bhutan must be covered in forest, putting a brake on farming and a potentially lucrative timber industry.

"There was a great temptation to dig into our forest wealth but we thought of the longer term," said Dasho Paljor Dorji from Bhutan's National Environment Commission.

Under its 11th five-year-plan, Bhutan aims to reduce "substantially" its fossil fuel imports by 2020. It has just 100 electric cars so far but wants to increase numbers and plans to introduce a nationwide network of charging stations. In 2016 it installed its first wind turbines.

A walk through spick and span Thimpu -- Asia's only capital city with no traffic lights -- gives a glimpse of Bhutan's green commitment.

Just two hours away in Punakha district earthmovers and bulldozers are chugging away at a hydropower project.

It is one of the 10 the country aims to build as part of its plan to remain carbon neutral.

All existing and future hydropower projects are financed by its friend and biggest partner India.

Hydropower was also Bhutan's largest export in 2016, accounting for 32.4 per cent of the country's total exports and eight per cent of its GDP, according to the Asian Development Bank.

All of the energy currently goes to India but there are plans to export also to Bangladesh.

But concerns have been growing over the impact of dams on biodiversity especially as Bhutan shifts from low-impact "run-of-the-river" dams, which do not require large reservoirs, to larger-scale barriers that do.

And being able to afford staying on a green path depends on Bhutan receiving outside funding, something in doubt since President Donald Trump announced last year that the US would withdraw from the 2015 Paris climate accord.

Under that accord, wealthy nations agreed to establish an annual $100-billion fund to help developing nations adapt to a heating planet.

Bhutan is keenly feeling the ravages of climate change, from melting glaciers, changing crop patterns to the spread of mosquito-borne diseases.

"Even the snowfall pattern has changed. Earlier it would snow for a few days, now it doesn't even last a day," Tenzin Wangmo, Bhutan's chief environment officer, told AFP.

Wangmo said the warmer climes meant paddy fields dot places like Bumthang that never grew rice in the past.

"Climate change is not in our control. We haven't done anything but we are paying a heavy price," she said.

"A lot of money and manpower is needed for such measures. But where is the funding and capacity-building?"

A Green Climate Fund (GCF) delegation that visited Bhutan in August said it would help the country's progress on a low-emission and climate-resilient path.

"I think Bhutan's contribution to the global community through keeping its carbon sinks intact, its nature as pristine as possible is a great one," said Dorji.

"Our cause is worth supporting. We should be rewarded equally, if not more."