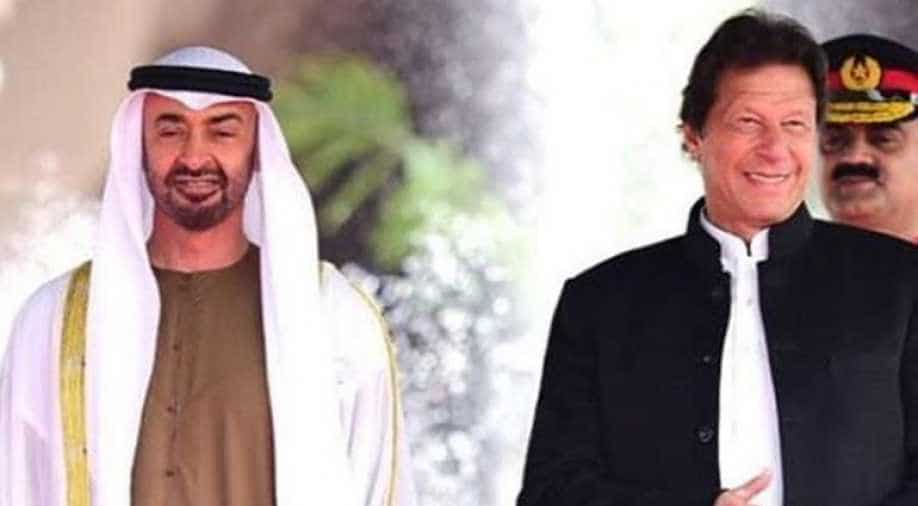 Crown Prince Sheikh Mohammed bin Zayed bin Sultan Al-Nahyan, who was on a day-long visit to the country after nearly 12 years, was received by Khan upon his arrival at Nur Khan airbase in Rawalpindi and the Prime Minister personally drove him to his residency for a welcome ceremony.

Pakistan on Sunday said the UAE has "almost finalised" investment plan for the setting up of an oil refinery in the country as the Crown Prince of Abu Dhabi met Prime Minister Imran Khan and discussed economic assistance to the cash-strapped country to bolster its foreign exchange reserves.

Crown Prince Sheikh Mohammed bin Zayed bin Sultan Al-Nahyan, who was on a day-long visit to the country after nearly 12 years, was received by Khan upon his arrival at Nur Khan airbase in Rawalpindi and the Prime Minister personally drove him to his residency for a welcome ceremony.

He was given a guard of honour and a fly-past during the red carpet welcome.

The Prince and the Prime Minister held a one-on-one meeting, followed by delegation-level talks between the top officials of the two sides as Pakistan seeks economic assistance to bolster its foreign exchange reserves and the government's fiscal policies.

Both delegations discussed bilateral relations and matters of mutual, regional and international interest.

Pakistan, reeling under severe financial crisis, reached out to some "friendly countries" for economic assistance including Saudi Arabia, China and the UAE since Prime Minister Khan assumed office in August.

Information Minister Fawad Chaudhry said the UAE has already promised to provide US $3 billion assistance and the Crown Prince also discussed investment to set up an oil refinery.

"The two side have almost finalised investment for setting up of a refinery," he said.

He said the two countries enjoyed traditional friendship and the Crown Prince said that he considered Pakistan as his "second home".

Foreign Office said this was the third interaction between the leadership of Pakistan and the UAE in less than three months, which is a "testimony to the special nature of our brotherly relations with this important GCC country".

"The UAE is Pakistan's largest trading partner in the Middle East and a major source of investments. It is home to more than 1.6 million expatriate community which contributes around US $4.5 billion annually to the GDP," the foreign office said.

It said Pakistan and the UAE are working closely to transform the existing special relations into a "long-term strategic economic partnership", as agreed between the two leaders during Prime Minister Khan's visit to the Emirates in November.

It said that apart from a "generous US $3 billion support to help Pakistan overcome its balance of payment crisis, provision oil on deferred payment was also under discussion."

Khan visited the UAE twice since August to seek economic assistance to ward off the country's foreign exchange crisis.

Pakistan and the UAE last week finalised the terms and conditions of a US $6.2 billion support package for Islamabad to help address the balance of payments crisis.

According to a statement released by the Pakistan government, Prime Minister Khan thanked the UAE for extending balance of payment support of US $3 million and said this financial support shows the continued commitment and steady friendship between the two countries.

The two sides also resolved to take all necessary measures to deal with matters related to trade enhancement and decided to form a Task Force to achieve this objective, the statement said.

Pakistan's all-weather ally China has also pledged to provide a generous aid to Islamabad to overcome its financial woes. Beijing has not yet revealed the quantum of its financial support.

Pakistan is negotiating a US $8 billion bailout package from the International Monetary Fund (IMF) to overcome a severe balance-of-payments crisis that threatens to cripple the country's economy.

Pakistan apprehends the IMF will come with stringent conditions of austerity besides scrutiny of US $60 billion China-Pakistan Economic Corridor projects whose terms till now remained confidential.

The Trump administration is making all efforts to ensure that any IMF loan to Pakistan is not used to repay its Chinese debt.

The government statement said the two sides strongly condemned terrorism in all its forms and manifestations, and expressed their resolve to work closely to root out the scourge.

To counter white collar crimes, including money laundering, the two leaders instructed the concerned authorities to expedite the finalisation of the Mutual Legal Assistance Agreement, the statement said.

Khan also briefed the Crown Prince about the efforts being taken by Pakistan to support and facilitate the Afghan-owned and Afghan-led reconciliation process. The two leaders agreed to work closely for the lasting peace and stability of Afghanistan.

The Pakistani Prime Minister congratulated the leadership of the UAE for declaring 2019 as the 'Year of Tolerance'.