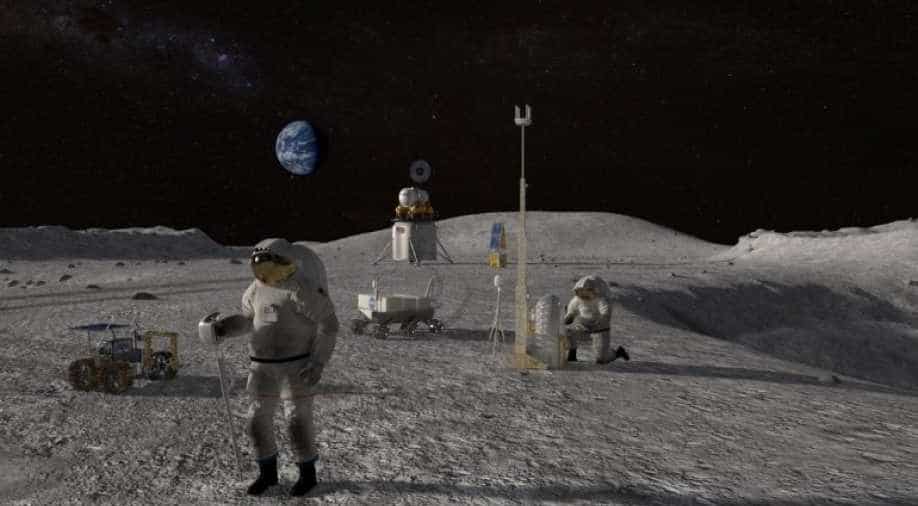 In this file photo, astronauts can be seen on the surface of the moon. (Image: NASA) Photograph:( Others )

GM and Lockheed said they would collaborate to make a battery-powered, autonomous Lunar Terrain Vehicle for NASA's Artemis lunar landing program, which aims to return US astronauts to the moon as early as 2024

US firms General Motors (GM) and Lockheed Martin Corp will develop a vehicle to drive NASA astronauts around on the moon's surface, they said on Wednesday, competing for a space project that could also promote their brands on earth.

GM and Lockheed said they would collaborate to make a battery-powered, autonomous Lunar Terrain Vehicle for NASA's Artemis lunar landing program, which aims to return US astronauts to the moon as early as 2024.

NASA is expected to launch a competition to develop lunar vehicles in its Artemis moon landing program. The agency has outlined plans for a variety of lunar vehicles that can carry human explorers, haul commercial payloads or traverse remote regions of the moon on missions lasting as long as 100 days.

Lockheed and GM have a history in space. Lockheed has worked on NASA space projects for 50 years and GM helped develop the original NASA lunar rover, which ferried NASA astronauts on the surface of the moon in the early 1970s.

For GM, getting back into the space business offers a fresh way to compete with Musk's Tesla Inc and SpaceX for the attention of investors, customers and future employees.

Lockheed and GM said their proposed lunar vehicle would use GM battery technology to travel "significantly farther distances" than the Apollo mission vehicles, which ventured just 4.7 miles from the landers.

One goal for the new vehicle is to allow for exploration of the Moon's dark, rugged south pole, and other areas humans have not gone before, GM and Lockheed said.

GM and Lockheed said their vehicle would be designed to provide "commercial payload services" and prepare for human landings.