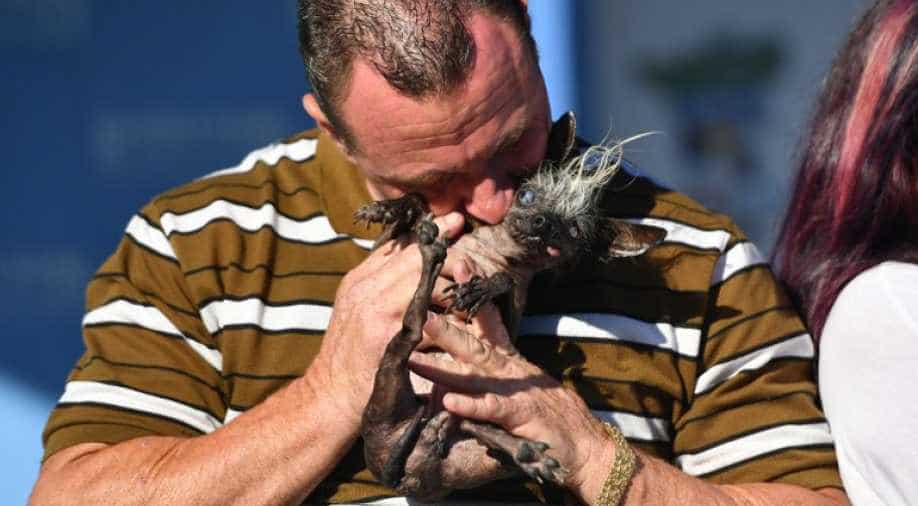 Sweepie Rambo, a chinese crested, gets a kiss from owner Jason Wurtz after winning the World's Ugliest Dog Competition in Petaluma, California on June 24, 2016. Photograph:( AFP )

Follow Us
A blind Chihuahua/Chinese Crested mix has been crowned the World's Ugliest Dog, beating 16 other contestants in an annual California-based pageant, NBC reported.

Sweepee Rambo, a 17-year-old dog from Encino, California, walked a red carpet and paraded on stage, as it was introduced to the audience.

Some of the other dogs in the show included Zsa-Zsa, a seven-year-old English bulldog rescued from a puppy mill, and Himisaboo, a half-dachshund with a Donald Trump hairstyle, according to organisers.

The World's Ugliest Dog competition, now in its 28th year, is held at the Sonoma-Marin Fairgrounds in Petaluma, California, about 40 miles (64 kilometres) north of San Francisco.

The canine competitors, many of whom have been rescued from shelters and puppy mills, are scored by a panel of judges on first impression, unusual attributes, natural ugliness and personality.

The level of cheers a dog receives from the audience while strutting down the catwalk is also taken into account.