Roller skating in the Himalayas 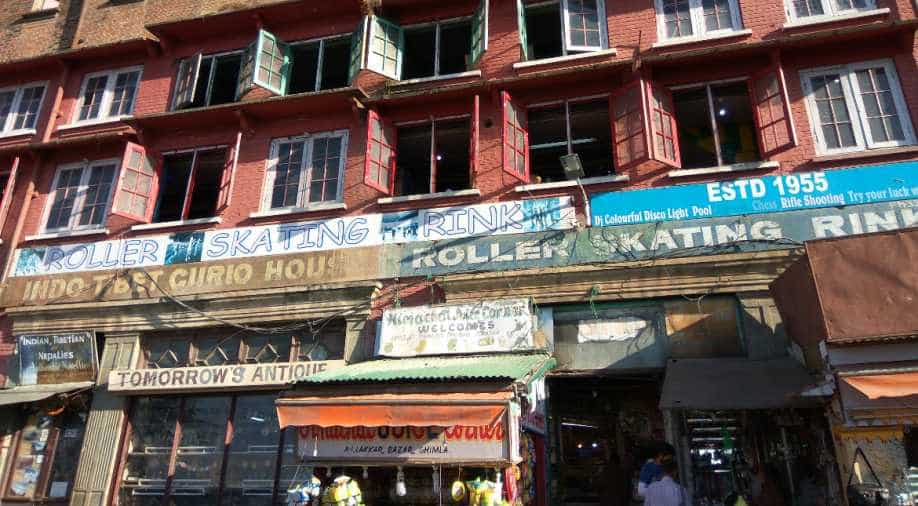 The facade of the rink is plain, it's the inside that's divine. Photograph:( WION )

Like the British before me I escaped Delhi's heat by heading to Shimla. Unlike them, I didn't come to this breezy Himalayan outpost to rule the Indian subcontinent, just to walk around and take clean breaths. A colleague who grew up there gave me the list of mandatory sights and eats, all indeed excellent.

But one day from nowhere I heard the fun funky sound of roller skating music, and sure enough I looked up and beheld a true marvel, the very last thing I expected to find in a surprisingly gentrifying Himalayan hill station: A roller skating rink.

I’ve been on ice skates since maybe five and roller blades since six, like every single Canadian. But I had never roller skated before in my life. Do people still actually roller skate?

It didn't immediately seem so. I laced up my skates and was instantly better than 95 per cent of the room. A man asked me for tips, and I gave him some. Indians around me were smiling, laughing, and tumbling to the floor in piles. I skated forwards, backwards, and even did a pretty inelegant spin. Every time I had the thought “I am surprisingly capable”, I nearly fell on my ass too. I was not actually very good.

But the rink had some true experts that blew my mind. I write this piece for them.

It wasn’t that their strides were just long and elegant. That's just simple locomotion. Merely skating forward is to be approaching competence, like managing to hit a tennis ball over the net but without using spin. For these sharks, these ringers, the point wasn't just to move from point A to B, but to do so as flamboyantly as possible.

The sidelines have as many observers as the rink has skaters. They watch, concentrated at one end. Skaters at the far end can skate like schlubs, but the slick A1 moves are saved for the crowd. Putting on a show while feigning nonchalance is the true purpose of roller skating. Why skate forward if not to show off? After all, it's a closed rink--you're not actually going anywhere.

I suspect theatrics is in rollerskating culture everywhere (insofar as anyone does it anywhere), but the need for drama is certainly not diminished in the land of Bollywood. Spectators here need spectacle and the hot dogs were up to the task.

A few skaters were positively burning rubber, their wheels somehow digging into the floor like skate blades carving ice. But here it wasn’t to stop or arrest motion, it was the opposite—to dance. Both legs would flail in and out, arms were incorporated into the choreography.

There was a macho quality to all this flair and flamboyant grace, like Russian ballet. Inside a roller skating rink, the manliest thing a man can do is twirl like an angel.

But most of the people were just constantly falling. The ones not yet on the floor were ticking time bombs. Every part of their rigid nervous bodies screamed that they were about to drop. But the experts, they were other-worldly. Not simply very good, but majestic.

From nowhere one gifted freak did the full-on splits on skates. (His legs were in front and behind him, not the east-west splits.) And not just for a second or two, he maintained this posture along the length of the rink. And when he got to the corner, he just turned and went up the other side too. Crazy! He circled the entire rink in splits, one inch between floor and testicles. Doing the splits under ideal conditions is impossible. Doing it on wheels with enough speed to complete a full lap, all while surrounded by a minefield of amateur skaters, was worth the 80 rupee ($1.60 Cdn) admission.

My grade nine English teacher used to tell our class hilarious stories about his days as a roller skater. There was a catalogue of moves he could pull off, as tricky and glorious as the names were funny. Somehow I still remember “shoot the duck”. I don't think there is any name for what I witnessed next in Shimla.

When I saw a guy sit on the floor, I didn’t understand his excited spoken Hindi and didn't need to. Men engaging in reckless fun is a universal language, and what was about to happen was written all over his face. I couldn’t believe it, but I knew what was coming. Next, skaters scattered away like birds in a jungle on the approach of giant beasts of prey. Another guy sat closely behind the first kid seated on the ground, then another and another, until there was a human centipede of seven. At the rink's corner was the maniac obviously about to attempt to jump over them all.

I got my camera ready.

Watch below to see if he made it, or if he failed and they all died:

One day in Delhi while looking only for an apartment to rent I instead found a snake charmer, but this, this was truly unexpected. Every skater contributed to my joy, gifted and inept alike. I thank them all.

In Shimla I trekked a gruelling half hour or so to see the ancient Jakhoo Temple with its oversized Hanuman statue from 2010. I visited the Indian Institute of Advanced Studies, the 19th century imitation Scottish mansion with Malaysian teak trimmings, where Gandhi and Nehru and others once met to discuss Indian independence and today kids with IQs of 1 lakh read books. I mean it, both were wonderful in their way and I take them with me.

But for my money, I encountered something contemporarily and quintessentially Indian--a blend of mind-blowing talent alongside the innocent, unselfconscious and infectious joy of even the worst skater--in a roller skating rink in Shimla.