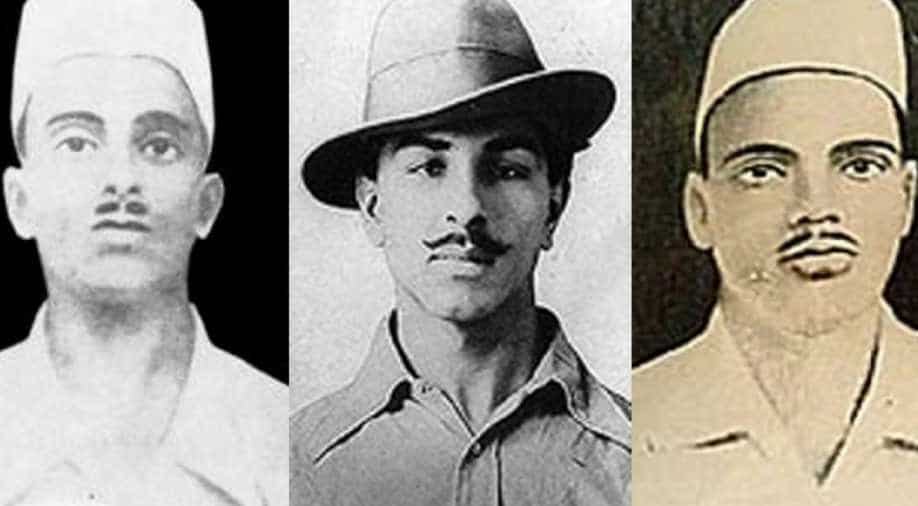 March 23 was declared as Martyr's Day in 1931 to pay homage to Bhagat Singh, Sukhdev Thapar and Shivaram Rajguru, the martyrs who infused fresh blood in the fight for India's independence.

The trio fought for India's independence from the British during the imperial British Raj.

Activists at an early age, the three were determined to join revolutionaries fighting for independence.

A revolutionary organisation, Hindustan Socialist Republican Association (HSRA), was established in 1928 by Bhagat Singh, Sukhdev Thapar and others. Its aim was to uproot the British rule from India.

Bhagat Singh, Rajguru and Sukhdev were charged with the murder of John Saunders, assistant superintendent of police of that time, and were sentenced to death.

The executions were to be carried out on 24 March 1931, but the three prisoners were hanged a day before, on 23 March at 7:30 pm in Lahore Jail.

At the time of their execution, Bhagat Singh and Sukhdev Thapar were just 23 years old. And Shivaram Rajguru was only 22 when he was hanged.

A few months before he was hanged, Bhagat Singh, who used to read a lot in jail, had written in a pamphlet titled ‘Why I am an atheist’:

“I know the moment the rope is fitted round my neck and rafters removed from under my feet, that will be the final moment….With no selfish motive, or desire to be awarded here or hereafter [in after-life], quite disinterestedly have I devoted my life to the cause of independence because I could not do otherwise. The day we find a great number of men and women with this psychology who cannot devote themselves to anything else than the service of mankind and emancipation of the suffering humanity, that day shall inaugurate the era of liberty.”

Bhagat Singh is famous for his quotes, some of which are: "If the deaf are to hear the sound has to be very loud", "They may kill me, but they cannot kill my ideas. They can crush my body, but they will not be able to crush my spirit", "Lovers, Lunatics and poets are made of the same stuff", "Merciless criticism and independent thinking are the two necessary traits of revolutionary thinking", "Love always elevates the character of a man. It never lowers him, provided love be love".