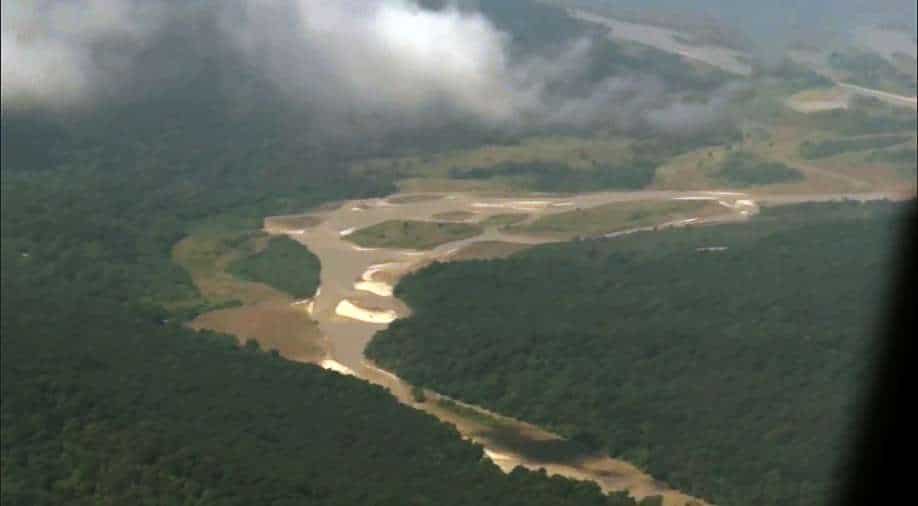 An aerial view of the rain-affected areas of Uttarakhand Photograph:( PTI )

Uttarakhand, where rains have claimed the lives of more than 54 people, recorded 192.6 mm against the usual 35.3 mm from October 1-20

Providing a numerical perspective to the unusually heavy rains ravaging several parts of the country, particularly the hill state of Uttarakhand in the north and coastal Kerala in the south, the India Meteorological Department said the country received 84.8 mm against the normal 60.2 mm this month.

Uttarakhand, where rains have claimed the lives of more than 54 people, recorded 192.6 mm against the usual 35.3 mm from October 1-20. The monsoon has wrought huge damage in the state, triggering floods and landslides that have blocked highways and smaller, key roads. Figures for the state were available till Wednesday, October 20.

Kerala received 445.1 mm of rainfall until October 20 as against the usual 303.4 mm. More than 40 people have been killed in Kerala, where videos of a house being swallowed by a swollen stream and landslides give a sense of how brutal the lashing was.

Experts attribute the extreme weather events to various causes, including warming of the seas, unabated development and delayed withdrawal of the monsoon.

Balaji Narsimhan, professor at the Civil Engineering department, IIT-Madras, said it was undoubtedly an unusual October and pointed to infrastructural challenges and unabated development.

Many of these extreme weather events have taken place earlier. But now places are more densely populated which amplifies the impact, Narasimhan, who also studied the 2015 Chennai floods, told PTI.

In December 2015, Chennai received its highest rain in 100 years in which more than 250 people were killed.

Discussing the situation in Kerala, Narsimhan said the state gets bountiful rainfall both during the Southwest monsoon and the Northeast monsoon but this year has been different.

In Uttarakhand, he explained, the interaction between western disturbance and the low pressure area resulted in heavy rains this week.

The western disturbance over north India is a phenomenon typically observed in non-monsoon seasons.

The interaction of cold winds of western disturbance and the warm winds of the low pressure area bring in thunderstorms and heavy rainfall, Mohapatra said, adding that such interaction had taken place during the deadly deluge in Uttarakhand in 2013 in which hundreds of people were killed.

M Rajeevan, former Ministry of Earth Sciences secretary who has been studying the Southwest monsoon for more than three decades, said there is a delayed withdrawal of the monsoon.

Since the retreat has been late over the last few years, the IMD in 2020 had revised the withdrawal date from northwest India.

This year, the withdrawal of the Southwest monsoon from northwest India commenced on October 6, the second-most delayed withdrawal since 1975. In 2019, it had started on October 9.

The IMD said its complete withdrawal from the country is expected around October 26.

More importantly, the active conditions of Southwest monsoon which began in September

have still not ended. Usually, such an active phase does not last for a month, but this time it has, Rajeevan said.

Warming of seas around India is another factor, Rajeevan pointed out.

Once these remnants enter the Bay of Bengal, the warm water aids in formation of cyclonic circulations.

In a paper published earlier this year, Rajeevan along with other meteorologists, said from 1970 to 2019, 7,063 extreme weather events killed 1,41,308 people in the country.