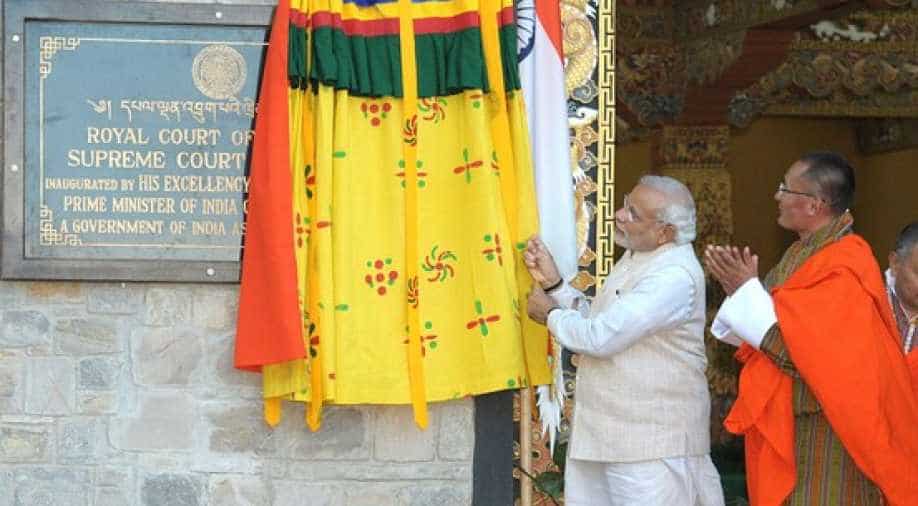 New Delhi has also given a go-ahead to Jogighopa and Pandu riverine ports for connectivity. Both ports are located on India's national waterway along the Brahmaputra passing through Assam.

The Nagarkata port in West Bengal has been notified as a "permanent" land customs station, with no restriction on commodity movement. Earlier it was a "seasonal" station, allowing only trade of certain commodities like oranges, ginger, cardamom.

The other trade route is Tripura's capital Agartala, which will facilitate the country's trade with Bangladesh. This comes, even as India plans to complete work on Agartala-Akhaura rail by next year as part of increased regional connectivity plans.

New Delhi has also given a go-ahead to Jogighopa and Pandu riverine ports for connectivity. Both ports are located on India's national waterway along the Brahmaputra passing through Assam. So far, Dhubri in Assam was the only riverine port designated for Bhutan's trade with India.

A release from Indian mission in Bhutan said, "Bhutan is India’s closest partner and friend" and a "special bonds of trust and understanding between India and Bhutan that have existed over decades"

India's commerce minister Piyush Goyal had visited Bhutan in February 2020 and since then a number of virtual meetings have taken place at the trade ministries level leading to the opening of new trade routes.

In October, India had allowed gave a green signal to trade on the Ahllay-Jaigaon axis which gives an alternative and leads to substantial decongestion on Phuentsholing-Jaigaon.

The opening of trade routes come, even as New Delhi is working to open new connectivity projects in South Asia and beyond.

Towards the west, its the Chabahar project that has helped India reach out to Afghanistan, with Myanmar and beyond its the Kaladan multimodal project whose crucial link is Sittwe port.

With Nepal in the north, India opened integrated check posts (ICP) in Birgunj in April 2018, Biratnagar in 2020, and construction for the third ICP at Nepalgunj has started while work on fourth ICP at Bhairahwa has started.

Down south with the Maldives, India launched the first-ever cargo ferry service connecting India's Tuticorin and Cochin ports with Kulhudhuhfushi and Male in the Maldives.