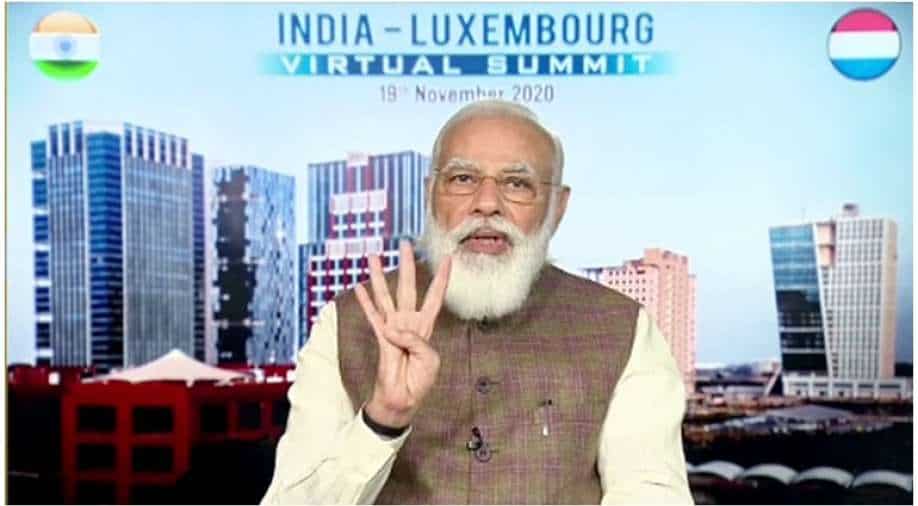 Luxembourg is one of the most important financial centers globally. Several Indian companies have raised capital by issuing Global Depositary Receipts (GDRs) at the Luxembourg Stock Exchange

Prime Minister Narendra Modi pitched for strengthening co-operation between India and Luxembourg in range of areas like financial and digital technologies. As he addressed the first summit between the two countries in two decades, PM Modi said that there was huge potential to further ramp up economic engagement.

The summit was held through video conferencing. During his address, PM Modi also talked about common values like democracy, rule of law and freedom which have strengthened the bilateral ties.

"There is a huge potential to expand economic engagement between the two countries. We have good cooperation in areas like steel, financial technology, digital domain, but there is a massive possibility of taking it forward," Modi said at the meeting with his Luxembourg counterpart Xavier Bette.

Luxembourg is one of the most important financial centers globally. Several Indian companies have raised capital by issuing Global Depositary Receipts (GDRs) at the Luxembourg Stock Exchange.

In his remarks, Modi also talked about possible cooperation between the two countries in dealing with the economic and health challenges posed by the coronavirus pandemic.

"When the world is fighting the economic and health challenges of the COVID19 pandemic, the partnership between India and Luxemburg can be beneficial for the two countries as well as both the regions," Modi said.

He also welcomed Luxembourg's announcement to join the International Solar Alliance (ISA). The ISA, initiated by India, is an alliance of over 120 countries which is focused on working for efficient consumption of solar energy to reduce dependence on fossil fuels.

Luxembourg is a key country in the European Union (EU), and is also the third largest source of FPI in India after US and Mauritius accounting for approximately 8.5 per cent of these investments.

India and Luxembourg have a longstanding cooperation in the steel sector. Luxembourgish company Paul Wurth has been in India for the last two decades and played an important role in upgrading the steel sector in India in collaboration with SAIL, TISCO and Jindal Steel.

ArcelorMittal, the world's largest steel-producing company, is based out of Luxembourg and recently entered into a joint-venture in India, partnering with Nippon Steel.