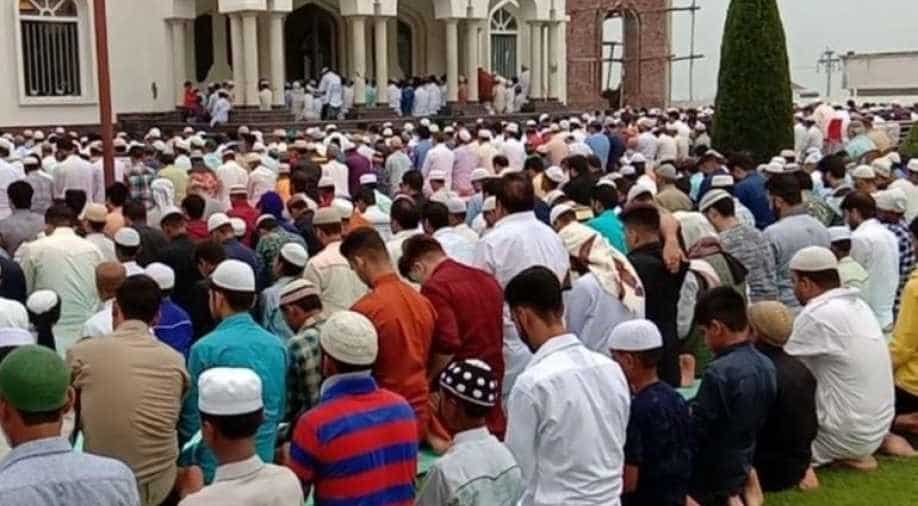 People thronged the local mosques on Monday to offer namaz on the occasion of Eid-ul-Adha in different parts of Kashmir. Photograph:( ANI )

The holy festival of sacrifice, which falls on the 10th day of Dhu al-Hijjah as per the Islamic lunar calendar is being celebrated today.

Jammu and Kashmir on Monday marked its first Eid al-Adha after the revocation of its special status of the state amid massive security arrangements.

People from all across the state gathered at their neighbourhood mosques and offered the morning prayers on the occasion.

Opinion: Bringing down Article 370 wall — the battle to contain Jihad in Jammu and Kashmir has just begun

The J&K administration had eased the prohibitory orders in the Valley for the past few days for the people to make purchases for Eid.

The holy festival of sacrifice, which falls on the 10th day of Dhu al-Hijjah as per the Islamic lunar calendar is being celebrated today.

Bakra Eid or Bakrid is marked by sacrificing an animal that is close to them to prove their devotion and love for Allah. Post the sacrifice, devotees distribute the offering to family, friends, neighbours and especially to the poor and the needy.

People buy goats or sheep a day prior for sacrifice, on the day commemorating Ibrahim (Abraham) who was to sacrifice his son as an act of obedience to God's command.

Other than prepping the feast, people also visit mosques, offer prayers, exchange gifts, meet and greet their loved ones and together enjoy several delicacies that are prepared on the occasion.

SRINAGAR: People offered namaz in the morning at Mohalla mosques in various parts of the city on #EidAlAdha, today. #JammuAndKasmir pic.twitter.com/5TcwnW0bQf

"Everything is peaceful. The restriction has eased and there has been a lot of improvement in public and transport movement," Deputy Commissioner, Srinagar, Shahid Iqbal Choudhary said.

Prime Minister Narendra Modi had assured during his speech on August 9 that the people of the state would not face any trouble in celebrating Eid and that the situation in the valley will return to normal gradually.

Jammu and Kashmir has been under lockdown since the government on August 5 abrogated Article 370, and has divided the state into two union territories.