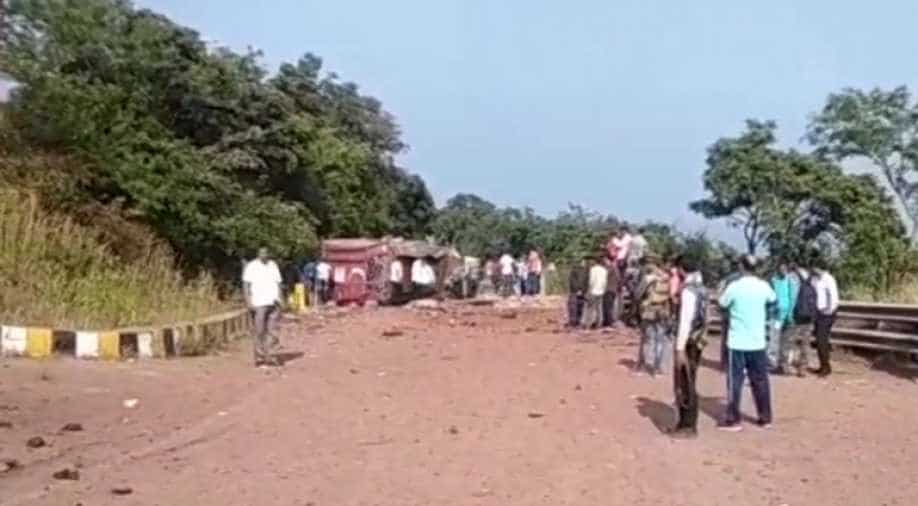 Security forces have launched a combing operation in the area to trace the ultras. Photograph:( ANI )

The Naxals triggered a powerful IED blast near curve no.6 on the hills, killing a CISF jawan, the bus' driver, conductor, cleaner and another person who is yet to be identified, Pallava said.

Four civilians and a CISF jawan were killed when suspected Naxals detonated a bus with an improvised explosive device (IED) in Chhattisgarh's Dantewada district on Thursday, four days ahead of the first phase of elections in the state, police said.

Two personnel of the Central Industrial Security Force (CISF) were also injured in the explosion, the third Naxal attack in 15 days in the poll-bound state.

The attack comes before Prime Minister Narendra Modi's scheduled visit on Friday to Jagdalpur district, about 100 km from Dantewada, to campaign for the BJP.

The IED explosion took place in a hilly area in Bacheli, about 450 km from here, when the CISF personnel were returning to their camp in Akashnagar after purchasing groceries from the market, Dantewada Superintendent of Police Abhishek Pallava told PTI.

The Naxals triggered a powerful IED blast near curve no.6 on the hills, killing a CISF jawan, the bus' driver, conductor, cleaner and another person who is yet to be identified, Pallava said.

The private bus, which was targeted, was allotted to the CISF team deployed in the Bailadila mining area of the National Mining Development Corporation in Dantewada for election duty.

1 CISF jawan&4 civilians lost their lives&2 injured in the attack today. Morale of the forces will not be affected due to such attacks. The upcoming assembly elections will be conducted peacefully:V Sinha, IG Bastar: Visuals from the site of naxal attack near Bacheli,Chhattisgarh pic.twitter.com/XLLvGZY8bt

Reinforcements were rushed to the spot and the injured personnel and bodies of the deceased shifted to a local hospital, Pallava said.
Security forces have launched a combing operation in the area to trace the ultras, he added.

On October 30, three police personnel and a cameraman of national broadcaster Doordarshan were killed in a Maoist attack in Dantewada's Aranpur area.

Before that, on October 27, four Central Reserve Police Force (CRPF) personnel were killed and two others injured after Maoists blew up their bulletproof bunker vehicle in Bijapur district.

Naxalites have asked voters to boycott the upcoming state Assembly polls, being held over two phases on November 12 and November 20.

The first phase is to be held in 18 Naxal affected constituencies of Bastar region, that falls in the southern part of the central Indian state.

The remaining 72 constituencies will go to the polls on November 20 and the votes will be counted on December 11.